France’s chief anti-terrorist prosecutor has revealed gruesome details of the knife rampage inside a Catholic church in Nice, and identified the attacker as a 21yo migrant from Tunisia who arrived through Italy just weeks ago. How the attack unfolded Early […] 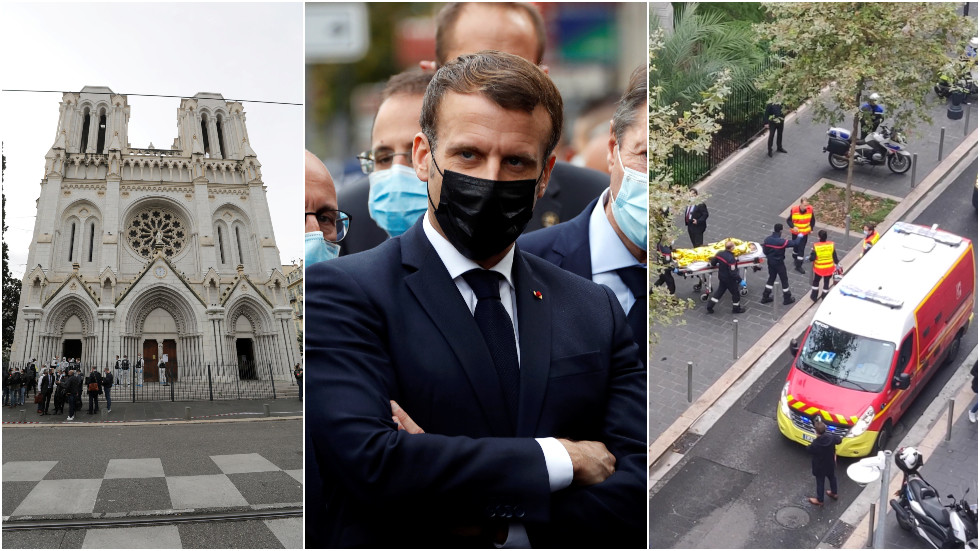 France’s chief anti-terrorist prosecutor has revealed gruesome details of the knife rampage inside a Catholic church in Nice, and identified the attacker as a 21yo migrant from Tunisia who arrived through Italy just weeks ago.

How the attack unfolded

Early on Thursday morning, an assailant armed with a knife entered the Basilica of Notre-Dame – Nice’s main Catholic church – and began a stabbing spree that lasted nearly 30 minutes, according to France’s National Anti-Terror Prosecutor Jean-Francois Ricard.

The attack left three victims dead, including a 60-year-old woman found at the entrance of the church with a “very deep throat cut, like a decapitation,” as well as a 55-year-old man – the officiator of the worship service – who also died of a significant throat wound. A third female victim, 44, managed to escape the church after sustaining several stab wounds, but later succumbed to her injuries in a nearby restaurant.

A team of four police officers engaged and “neutralized” the suspect as he advanced toward them in a “threatening manner.” The officers first tried to subdue him with a stun gun but were forced to resort to their service weapons, with fourteen bullet casings found at the scene. The attacker was injured and taken to a hospital, where he remains in serious condition.

French authorities have identified the attacker as Brahim Aouissaoui, a 21-year-old Tunisian national believed to have entered Italy on September 20, through the island of Lampedusa, where he spent two weeks in quarantine.

Aouissaoui, who wasn’t previously known to French anti-terrorist authorities, arrived in Paris on October 9, apparently carrying an Italian Red Cross identity document. He traveled to Nice by train on Thursday morning, changed his clothes at the station, and walked directly into the cathedral.

In addition to the 30cm-long knife used in the assault, police recovered two other blades, a bag, two cell phones and a copy of the Koran from the crime scene. While the attacker’s motive was initially unclear, French officials, including Ricard and President Emmanuel Macron, have since linked the stabbing spree to “Islamist terrorism” – consistent with statements from witnesses who reported hearing the assailant cry “Allahu Akbar!” (“God is great!” in Arabic) during the rampage.

Also on rt.com France brought Jihad on itself, now has some tough decisions to make – former anti-terrorism cop to RT

“[The attack] painfully reminds us how much the deadly ideology of Islamist terrorism remains alive and well, as well as its will to attack our liberties, our most essential liberties, freedom of expression, freedom of teaching, freedom of worship,” Ricard said at a press conference.

Nice’s mayor, Christian Estrosi, also told local media that the attack bore the same “modus operandi” as a grisly beheading of school teacher Samuel Paty earlier this month, who was apparently killed for sharing a cartoon of the Prophet Mohammed to students as part of a class discussion on freedom of expression.

French authorities have placed the country on highest alert following the shocking incident, ramping up its terrorism warning system while deploying thousands of soldiers to stand guard at schools and houses of worship.

“I have decided that our soldiers will be more mobilized in the coming hours,” Macron said, adding that the troop presence would be more than doubled, from 3,000 to 7,000, to patrol key areas.

Once again this morning, it was three of our compatriots that fell in Nice, and very clearly France is under attack.

Vowing a “firm and relentless” response, Prime Minister Jean Castex also announced that France would be placed on its maximum terrorism threat level of “attack emergency,” bumped up from the lower tier of “enhanced security.”

The deadly stabbings in Nice were joined by a series of apparent “copycat” incidents elsewhere in France on Thursday, including in Avignon, Lyon and Sartrouville, as well as outside a French consulate office in Saudi Arabia. All of the other attacks were thwarted before the assailants could claim any victims, however, with a suspect shot dead by police in Avignon, and three others arrested in Lyon, Sartrouville and in Jeddah, where the consulate is located. One Saudi guard suffered a minor injury in the attempted attack.

Thursday’s attack has been condemned the world over, with US President Donald Trump insisting “these radical Islamic terrorist attacks must stop immediately,” while countries across Europe and the Arab world similarly denounced the violence and offered condolences to victims’ families.

Subscribe to RT newsletter to get stories the mainstream media won’t tell you. 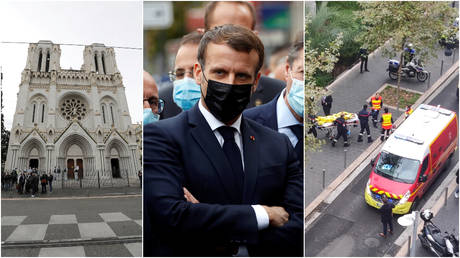