A Danish daily credited with starting a debate over criticism of Islam has said it will not print cartoons of the Prophet Mohammed as part of a political advertizing campaign, due to alleged safety concerns. Jacob Nybroe, editor-in-chief of Jyllands-Posten, […]

A Danish daily credited with starting a debate over criticism of Islam has said it will not print cartoons of the Prophet Mohammed as part of a political advertizing campaign, due to alleged safety concerns.

Jacob Nybroe, editor-in-chief of Jyllands-Posten, said his newspaper will not participate in an ad campaign launched by a Danish political party, the New Right, which will feature caricatures of the founder of Islam as a way to “show support for the victims of Islamic violence” and make it clear that Denmark won’t “bend when we are threatened with violence, murder, and terror.”

The adverts, run in collaboration with the French satirical magazine Charlie Hebdo, will include cartoons used by French schoolteacher Samuel Paty in a lesson about freedom of speech. A radicalized Chechen refugee beheaded Paty earlier this month in retaliation for the lesson.

Also on rt.com Muslims are strangely obsessed with cartoons, all while there are very real crimes over which they should be angry at France

Nybroe told Danish media he sympathized with the “declaration of solidarity” from the right-wing party, but his paper would not be able to print the ads, after the authorities foiled four separate attacks planned against the news organization.

The paper’s staff have also been targeted in the past. Contributing cartoonist Kurt Westergaard survived a 2010 assault when an armed man broke into his home.

“Security for us is unfortunately not a theoretical, moral, or political consideration,” Nybroe said in an email to Denmark’s Journalisten.

He argued that his newspaper had to operate in the open and therefore could not afford to take unnecessary risks that would put its staff in direct danger.

I wish it was different, that we could express ourselves freely, as we do in all other matters. But violence works.

“Only in one circumstance do we show caution – that is, in fact, a censorship inflicted on us by threats: we do not show drawings of the Prophet Muhammad [sic],” Nybroe said. 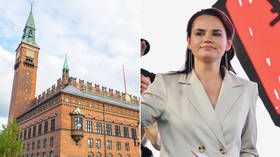 Three other Danish papers have said they will need to review the adverts before making a decision about whether to publish them or not.

Jyllands-Posten’s decision not to run the provocative political messages has particular significance, however. The Copenhagen paper made international headlines after printing 12 editorial cartoons in 2005, most of which depicted the Prophet Mohammed. The Danish prime minister at the time, Anders Fogh Rasmussen, described the ensuing international scandal, including violent protests worldwide, as “Denmark’s worst international crisis since World War II.”

The paper said the collection of cartoons was meant to spark discussion about criticism of Islam and self-censorship. Charlie Hebdo later republished some of the cartoons, leading to an attack on the French magazine’s Paris offices by a group of Islamist militants.

France has vowed to crack down on Islamic extremism following Paty’s murder. The country has suffered from a string of knife attacks, with the latest, a terrorist rampage at a church in Nice leading to the death of three people. French officials have raised the nationwide terror-alert system to its maximum level as the government warns that further attacks are expected. 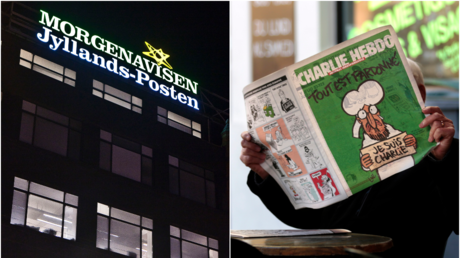