Apple Inc, shares fell about 4% after the company reported iPhone sales that missed Wall Street estimates and a slump in revenue from China. The company gave no forecast for the key holiday quarter. However, Chief Executive Officer Tim Cook […] 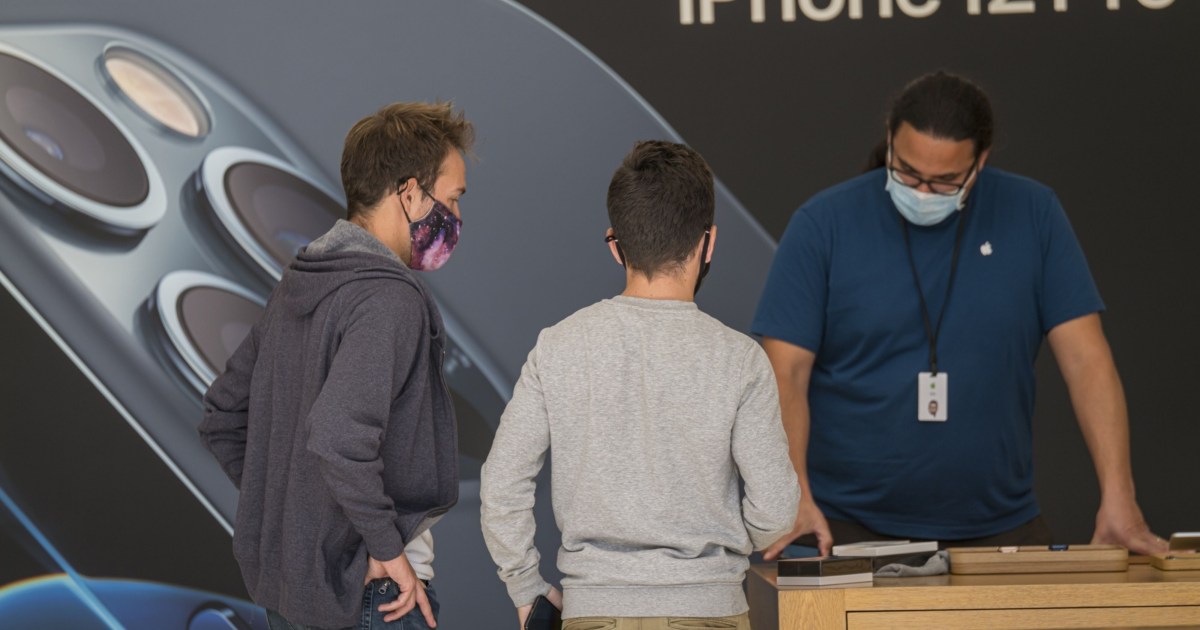 Apple Inc, shares fell about 4% after the company reported iPhone sales that missed Wall Street estimates and a slump in revenue from China.

The company gave no forecast for the key holiday quarter. However, Chief Executive Officer Tim Cook said the new iPhone 12 line has been well received. Sales of Macs and Services reached all-time highs in the quarter, leading the record fourth quarter.

The Cupertino, California-based technology giant on Thursday said fiscal fourth-quarter sales came in at $64.7 billion, a record for the period. That beat analysts’ estimates of $63.5 billion, according to data compiled by Bloomberg. Earnings came in a 73 cents a share, also topping Wall Street expectations.

Sales of the iPhone fell 21% on anticipation of the new models. Cook said the response to the 5G iPhone lineup and other new devices has been “tremendously positive.”

In Greater China, one of the company’s most important regions, revenue fell 29% to $7.9 billion, the lowest in several years. Products beyond the iPhone grew double digits in China, Luca Maestri, Apple’s chief financial officer, said in an interview with Bloomberg Television. He added that he expects the iPhone 12 Pro Max with its larger screen to do “incredibly well” in the region and that the company is confident about growing there in the December quarter.

“Apple capped off a fiscal year defined by innovation in the face of adversity with a September quarter record, led by all-time records for Mac and Services,” Cook said.

The world’s largest technology company didn’t provide guidance again due to the ongoing impact of Covid-19, with Maestri citing the uncertainty from rising cases in the U.S. and Europe. The holiday quarter is usually Apple’s most important. This year, it includes the release of the iPhone 12 lineup, a new iPad Air, a cheaper HomePod and Macs with Apple’s own processors.

Maestri said Apple is optimistic about the iPhone’s performance, saying that the new line has the “tailwind of 5G, which is a once-in-a-decade opportunity.”

Fiscal fourth-quarter revenue from the iPhone was $26.4 billion. Wall Street expected $27.1 billion. The iPad brought in $6.8 billion, beating estimates of $6.1 billion, while Mac sales totaled $9 billion, ahead of Wall Street forecasts of $8 billion.

The pandemic has forced millions of people to work and study from home, spurring demand for Apple devices. But the health crisis has also disrupted the company’s global supply chain.

“Our outstanding September quarter performance concludes a remarkable fiscal year, where we established new all-time records for revenue, earnings per share, and free cash flow, in spite of an extremely volatile and challenging macro environment,” said Maestri said in a prepared statement.

That left Apple relying on other new products in the September quarter, including a couple of weeks of sales of the Apple Watch Series 6 and a lower-end iPad. The company also saw continued iPhone sales from the cheaper iPhone SE launched earlier this year, the newest iPad Pro and existing Macs.

Services, which includes the App Store, Apple Music and iCloud, generated sales of $14.5 billion, up from $12.5 billion a year ago and higher than Wall Street expectations of $13.9 billion. The services result was spurred by records for music streaming, cloud storage, AppleCare product support and the App Store, Maestri told Bloomberg TV.

That segment might get another boost in the current quarter when the company launches Apple One subscription bundles and a new Fitness+ service. Maestri said the bundles will launch on Friday and that the fitness service will debut this quarter.

Apple’s Wearables, Home and Other Products category, one of the firm’s fastest-growing segments that includes the Apple Watch and AirPods, brought in $7.9 billion in revenue. That beat Wall Street predictions of $7.4 billion.