A professor of African American history has reportedly resigned from her university and vanished from social media after an anonymously-published article alleged she has been posing as Latina.

Kelly Kean Sharp, an assistant professor of African American history at South Carolina’s Furman University, has stepped down after a post on Medium claims to have unmasked her as having faked Latina heritage, Inside Higher Ed reported.

While Sharp’s Twitter account has now been deleted, screenshots shared by the anonymous Medium poster and Inside Higher Ed show that she labeled herself as ‘Chicana’ – a word to describe an American woman of Mexican descent – in her biography.

In addition to using the ‘Chicana’ signifier, Sharp also allegedly implied Latina heritage in tweets, notably referring to her grandmother in Spanish as ‘abuela’, saying she came to the US during World War II. The poster claims to have looked into the academic’s genealogical records and found no grandparents born outside the US. 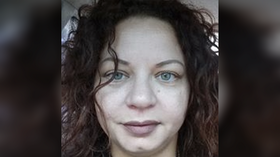 The author of the alleged exposé claims to have known Sharp as a self-identified non-Hispanic white woman and said other of Sharp’s acquaintances tasked him/her with revealing the academic’s true identity.

It “remains unknown exactly when she took on this persona and how much she has used it professionally” but “many who previously knew her are quite confused,” given that they “had only ever identified as a non-Hispanic white woman as far as they knew.”

Tom Evelyn, a Furman University spokesperson, told Inside Higher Ed that the university was investigating the allegations against Sharp, adding that he was “disappointed” to learn of them.

Sharp also appears to have served as a faculty adviser for Latines Unides, a Hispanic cultural club and was a featured guest for a panel on Latino College experiences, when she worked previously at Luther College. This was confirmed to the website by Luther spokesperson Laura Barlament.

“We must wonder if she claimed a Chicana background in order to take charge of such a panel,” the Medium author writes.

The author also accuses the academic of lying about her background in a now-disappeared biography page on the Furman University website. Sharp wrote there that she grew up in the “majority-minority population” town of Encinitas, California. In reality, they say she grew up in a “wealthy beach community, essentially a white suburb.”

Sharp has yet to comment on the allegations or her reported resignation.

READ MORE:  As Covid-19 cases continue to sharply rise in Russia, Kremlin admits country has a shortage of doctors & calls for pay rises

Also on rt.com ‘I absolutely cancel myself’: African studies professor says she FAKED BEING BLACK most of her adult life, admits she is white

While Sharp has not confirmed her identity, the ‘race faking’ phenomenon has become almost a trend in US academia. Earlier this year, University of Wisconsin-Madison graduate student CV Vitolo and George Washington University African studies professor Jessica Krug, both white, were outed for pretending to be black. 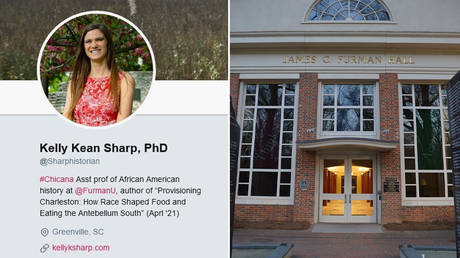