The US in the 2020 election year is a country deep in crisis. It’s been torn apart by the debate on racism, and millions have been infected with the coronavirus. On top of that, its president is pouring oil on […]

The US in the 2020 election year is a country deep in crisis. It’s been torn apart by the debate on racism, and millions have been infected with the coronavirus. On top of that, its president is pouring oil on the flames with his Twitter tirades. At the beginning of the year, things were looking good for Donald Trump: the economy was doing well, unemployment figures were at a 50-year low, his job approval rating was rising, and the Democrats were preoccupied with themselves. But then came the coronavirus, a hazard that the president initially made light of, saying it would miraculously disappear. Instead of a miracle, the crisis hit the United States harder than any other country. The economy is in the doldrums. And COVID-19 is making the shortcomings of the health care system glaringly obvious. Black Americans have been hit harder by the coronavirus than most. A higher proportion of them work in low-wage jobs that offer little protection against the virus, and they are less likely to have health insurance. The rage expressed in demonstrations against racism is being fuelled by the corona crisis and the mass unemployment it has triggered across the US. It is hard to imagine that the economy will recover quickly – despite the trillions of dollars Trump is giving to companies. It is also hard to imagine that the millions of unemployed will have jobs again by the time the election is held. Filmmakers Claudia Buckenmaier and Marion Schmickler traveled through the swing states of Arizona, Wisconsin and Michigan and asked people how the economic and health crisis is affecting them. What hopes do voters have going into November’s election? The bitter dispute between Republicans and Democrats and Donald Trump’s divisive style of government has brought democracy in the US to brink of the abyss. The distrust is so great that the Democrats even expect that Trump will reject the election result if he loses. Unimaginable? The Democrats seem to be preparing for exactly this scenario. ——————————————————————- DW Documentary gives you knowledge beyond the headlines. Watch high-class documentaries from German broadcasters and international production companies. Meet intriguing people, travel to distant lands, get a look behind the complexities of daily life and build a deeper understanding of current affairs and global events. Subscribe and explore the world around you with DW Documentary. Subscribe to: DW Documentary: https://www.youtube.com/channel/UCW39zufHfsuGgpLviKh297Q?sub_confirmation=1#
DW Documental (Spanish): https://www.youtube.com/dwdocumental
DW Documentary وثائقية دي دبليو: (Arabic): https://www.youtube.com/dwdocarabia For more visit:
http://www.dw.com/en/tv/docfilm/s-3610
Instagram:
https://www.instagram.com/dwdocumentary/
Facebook:
https://www.facebook.com/dw.stories DW netiquette policy: https://p.dw.com/p/MF1G 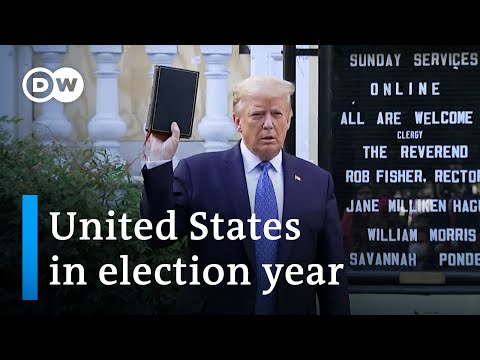