Seychelles opposition candidate Wavel Ramkalawan has won the archipelago’s presidential election with 54.9 percent of valid votes cast, upsetting incumbent President Danny Faure. “I declare … Ramkalawan as the elected candidate,” the electoral commission chairman Danny Lucas said on Sunday. The opposition, narrowly defeated in a presidential election in 2015 and buoyed by a landmark victory in a parliamentary poll a year later, won its first presidential poll in the 40 years since Seychelles gained independence from Britain. Ramkalawan, an Anglican priest and leader of the Seychelles Democratic Alliance, was running for the presidency for the sixth time. He lost the 2015 poll by 193 votes to James Michel in an unprecedented second round of voting. Al Jazeera's Malcolm Webb reports. – Subscribe to our channel: http://aje.io/AJSubscribe – Follow us on Twitter: https://twitter.com/AJEnglish – Find us on Facebook: https://www.facebook.com/aljazeera – Check our website: https://www.aljazeera.com/ #AlJazeeraEnglish #Seychelles 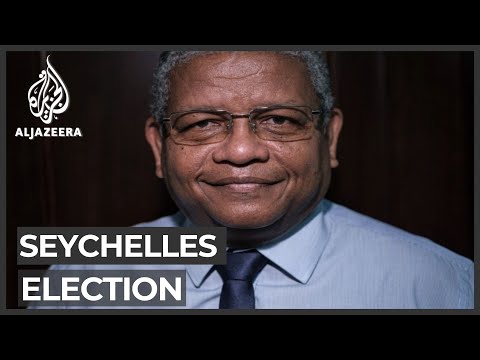