Ex-UFC fighter and Instagram favorite Paige VanZant has claimed that she was shocked to receive cash from fans after she invited them to transfer her money, adding that she was “absolutely not” going to send nude photos in return. Recently-released […]

Ex-UFC fighter and Instagram favorite Paige VanZant has claimed that she was shocked to receive cash from fans after she invited them to transfer her money, adding that she was “absolutely not” going to send nude photos in return.

Recently-released flyweight VanZant frequently fields requests from admirers desperate for her to sign up to adult subscription site OnlyFans, fueled by her repeated racey photoshoots which often feature her cavorting semi-naked with her husband, Bellator MMA welterweight Austin Vanderford.

Despite trying to promote her role as the newest star of Bare Knuckle Fighting Championship, which she joined following her UFC release in July, social media sensation VanZant was again asked when she would be pursuing a career in modeling after offering her Instagram following of more than 2.7 million the chance to send her questions.

The photogenic fighter said she had not expected followers to take her seriously when she made mention of her account on money transfer service Venmo.

“Austin and I did a fan question [session] where you guys could write in,” she explained, reacting with apparent surprise to the response she had received.

“There were 200 questions and about 20 of them were ‘hey, why don’t you make an OnlyFans?’

“Basically, I said, ‘I’m not going to make an OnlyFans but if you really want to send me money and you appreciate the things I post on Instagram, you can VenMo me.

“I was like, ‘go ahead and send me money so you can show me appreciation.

“I did have a lot of people Venmo me, which I did not expect to happen.

“Five or ten people sent me money and thought that they would be receiving an explicit picture.

“That was absolutely not what was going to happen. I’m sorry for the confusion and for anybody who sent me money, hoping to get nudes or anything like that.

“The point is, I’m not doing an OnlyFans because I’m not going to do that kind of stuff.”

VanZant has become far better known for her social media photoshoots and videos than her sporting accomplishments, admitting earlier this year that she earned far more from posting pictures than she did from appearing in the UFC.

She called for a payrise at the time, but was abruptly axed after losing her first fight in 18 months in the first round against Amanda Ribas at UFC 251 in July.

The 26-year-old wants fans to subscribe to her new promotion’s app, which includes a new series showing her first training sessions, but revealed that she had passed the money from the misunderstanding on to animal charities.

“I went and donated all the money that was sent to me to a charity here in Florida because it just felt weird, I don’t know,” she said.

“It was a dumb joke but no, I’m not going to make an OnlyFans. End of that – don’t send me any money.

“And I definitely do not judge any males, any females who are on OnlyFans. It’s just not for me at this stage of my life, so everybody who keeps asking on social media, you’re not going to convince me.”

VanZant, who released a series of black-and-white photos with Vanderford that included references to scratching, biting, crawling and begging last week, then turned to her semi-clothed spouse and said: “I save all the super special things about myself for my husband.

“It’s all his and you can fight him for it. Just kidding – it’s my decision and he would support me with anything I wanted to do and I love him so much.”

In the new series charting her change of sport, VanZant can be seen sparring with men in a gym in the build-up to what she hopes will be a change of fortune following a run of three defeats out of four since December 2016.

She had been due to make her debut before the end of the year, although that has now been pushed back to 2021.

“I absolutely love that I’m entering in to this opportunity,” she told the documentary.

“I wanted to be a part of that. My support system knows where I’m meant to be and where I belong – and that’s right here. The main focus is being on the best athlete possible.”

Telling her fans to sign up, she promised: “It’s absolutely the best possible behind-the-scenes that you could get.

MMA fighters and viewers have expressed concerns about the move. “I don’t want to be like one of those dorks on the internet,” Bellator light heavyweight Anthony Smith said after hearing the news.

“She’s marketable. She’s a very attractive lady. You’ve seen what some of these guys look like, coming out of these bare knuckle fights.

“I just feel like she has more skills than that. She’s a great grappler, she’s got wrestling abilities. She could take her full skillset somewhere and be really appreciated.

“Get your money, girl. I’m with you. She would be a good face for bare knuckle. She brings a softer look to it.”

“She hasn’t been doing that great lately,” he pointed out. “She’s still Paige VanZant, so people are going to follow her no matter what.

“If she’s getting paid then it’s a great move but…she’s not a power puncher, she’s not someone you think of as a crisp striker, especially with hands.

“It’s not like she’s a boxer so…if your whole stick is like, ‘I’m a cute little girly girl’, why are you going to fight people at bare knuckle and get your face all jacked up?

“You’re going to cut that much easier and you’re not that great with your hands.

“If you get somebody in there that really likes to box, you don’t have the option to clinch that much or do anything else. That seems kind of dangerous.” 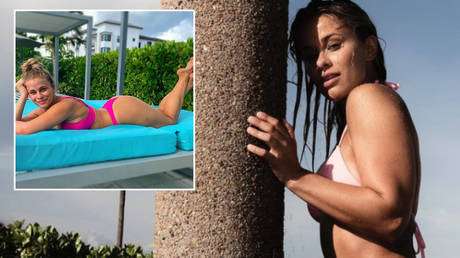