Atletico Madrid striker Luis Suarez bought and donated 1,000 Big Macs for children in his native Uruguay as part of a charity event. The 33-year-old spent €4.75 ($5.63) on each of the burgers – which he donated to children in […]

Atletico Madrid striker Luis Suarez bought and donated 1,000 Big Macs for children in his native Uruguay as part of a charity event.

The 33-year-old spent €4.75 ($5.63) on each of the burgers – which he donated to children in a youth league in Pando, a small city north west of Uruguayan capital Montevideo – raising a total of €4,750 ($5631) for the Ronald McDonald House Association and the Liceo Impulso school.

McDonald’s Uruguayan Twitter account thanked him for his donation to the annual event, which matched the donation made by Argentinian striker Carlos Tevez last year.

“Luis Suarez proved that the Big Day has no frontiers. He bought 1,000 Big Macs from Spain via McDelivery to help the House Ronald, Liceo Impulso and donate to Pando’s BabyLeague.

“Thank you, Luis, for putting the jersey on the Big Day! Anyone can join in wherever you are.”

The same Twitter account once trolled the striker after he was sent off for biting Italy’s Giorgio Chiellini at the 2014 FIFA World Cup, but it seems the hatchet has evidently been buried.

TRANSLATION: Hi, Luis Suarez, if you are still hungry, come take a bite out of a Big Mac. #RealTimeMarketing pic.twitter.com/YzllFYaDfM

Despite being in Spain, Suarez was able to purchase the burgers for the children of Pando using the McDelivery service.

READ MORE:  'If I give my word, I have to follow this': Emotional Khabib explains he promised his MOTHER he would retire after UFC 254 (VIDEO)

The Ronald McDonald House Association provides support for pregnant women and families of sick children, and is said to help more than 7,000 each year.

As well as biting Chiellini – for which he received a four-month ban from the sport – Suarez also received lengthy suspensions for biting Chelsea’s Branislav Ivanovic during his time at Liverpool and PSV Eindhoven’s Otman Bakkal whilst at Ajax.

Suarez joined Atletico Madrid in the summer in a free transfer, though his former club Barcelona may receive up to €6 million in performance-related add-ons.

He has played five games for his new side, scoring three goals.

On Tuesday, he and Los Rojiblancos were beaten 4-0 by Bayern Munich in the UEFA Champions League.

The striker’s final game for Barca – where he scored 198 goals in 283 appearances – also came against Bayern. Suarez found the net in that match, a single-leg Champions League quarterfinal in August, but the German giants demolished his side 8-2. 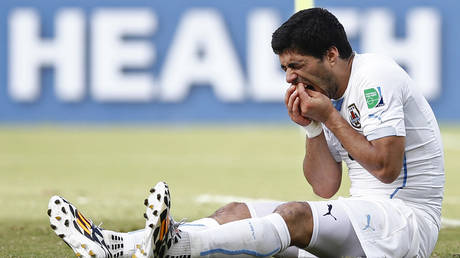