Manchester United and Chelsea have both had topsy-turvy starts to the new Premier League campaign but neither Old Gunnar Solskjaer nor Frank Lampard can afford to cede ground to the other in Saturday’s huge clash at Old Trafford. It may […]

Manchester United and Chelsea have both had topsy-turvy starts to the new Premier League campaign but neither Old Gunnar Solskjaer nor Frank Lampard can afford to cede ground to the other in Saturday’s huge clash at Old Trafford.

It may seem premature to say it, but Saturday afternoon’s fixture between relative managerial novices Solskjaer and Lampard has a rather weighty feel to it in the context of the new Premier League season.

Last year saw these two historic rivals separated by goal difference in third and fourth position, but with both Liverpool and Manchester City showing signs of depreciation since the onset of the COVID-19 pandemic, an opportunity appears to exist for that gap to be closed.

Saturday’s game at Old Trafford will go a long way to addressing this. Solskjaer and Manchester United have endured an occasionally torrid beginning to their season.

READ MORE:  Freed Ronaldinho forced to miss event after testing positive for COVID-19 - but Brazil icon offers HUGS as he insists he is fine

An empty, cavernous Old Trafford doesn’t quite have the same authoritative feel to it as when it is crammed full with nearly 80,000 supporters. It may have been a factor in United’s home defeat to Crystal Palace and the stunning 6-1 reverse to Jose Mourinho’s Tottenham Hotspur.

The Norwegian did gain a galvanizing win away to Paris Saint-Germain this week in the Champions League to steady his nerves, but consistency has been a rare commodity in the red half of Manchester recently, and it’s something that will be severely tested by Frank Lampard and his galaxy of big-money stars.

Backed by Roman Abramovich, Lampard has overseen a summer of spending not see in West London since the early days of the Russian billionaire’s empire at Stamford Bridge. Last season’s transfer ban and the exit of club legend Eden Hazard afforded Lampard a resource not often given to Chelsea managers – time.

With a season to review what was required to return Chelsea to the European elite, Lampard opted to funnel Abramovich’s millions into a host of new signings. First came Hakim Ziyech from Ajax, followed by RB Leipzig’s Timo Werner, Kai Havertz, Ben Chilwell, Thiago Silva and Edouard Mendy.

The outlay, one suspects, comes at the expense of Lampard’s prime commodity last season. Expectations are higher this season, and with that comes pressure – something that no Chelsea manager during Abramovich’s reign has been immune to.

That said, there have been signs of improvement at Stamford Bridge. The new signings are beginning to bed in but, very worryingly, the defensive frailties that caused so much consternation last season don’t appear fully addressed.

And that is perhaps why the crunch clash is such a fascinating encounter. Manchester United and Chelsea remain the most successful clubs in the Premier League era and any return to the upper-echelon of the division, one feels, can only come at the expense of the other.

The game at Old Trafford will go a long way to addressing which of these two imperfect teams will get the upper hand over another. A case can be made for both Solskjaer and Lampard being successful – but can they both be, especially in direct competition with one another? 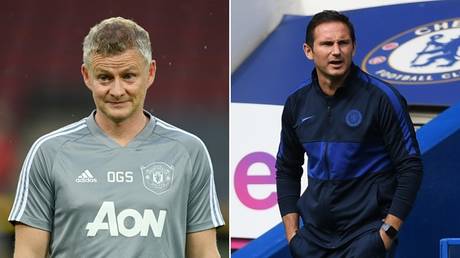