Tony Ferguson, who lost to Khabib Nurmagomedov’s latest victim Justin Gaethje, has dismissed the Russian champion’s retirement by claiming that he will fight him soon, while Nate Diaz has been mocked for another bizarre reaction. Former interim lightweight champion Ferguson […]

Tony Ferguson, who lost to Khabib Nurmagomedov’s latest victim Justin Gaethje, has dismissed the Russian champion’s retirement by claiming that he will fight him soon, while Nate Diaz has been mocked for another bizarre reaction.

The man who was badly beaten by Gaethje in a fifth-round defeat at UFC 249 in May shared a shot from his acrimonious press conference with the Russian before the pair had been due to headline the event.

Frustrated Ferguson, who would have been unlikely to have faced his scheduled former foe in the future even without Nurmagomedov’s decision to down his gloves, shared a photo of the rivals being separated by UFC president Dana White, adding: “See you soon, fathead.”

While Ferguson took to Instagram to insult the champion after his second-round submission of Gaethje, veteran Nick Diaz opted to use Twitter to revive a story about a skirmish he claimed to have had with Nurmagomedov in 2015.

Diaz accused him of being a “bully” to him at the event and added that he had silenced Nurmagomedov by “slapping him in his face for making fun of me”.

In a confusing assessment of the altercation, Diaz has since insisted that he did not mind having a request to fight Nurmagomedov in the Octagon turned down because his unanswered slap represented a win over him.

“29 and 1,” Diaz tweeted after Nurmagomedov beat Gaethje, putting himself forward as a man who had broken the proud unbeaten record held by “The Eagle”.

Bellator MMA lightweight Josh Thomson told Diaz to remain silent, while others pointed to his most recent fight, when he lost to Jorge Masvidal in November 2019, and argued that he would be a worthy opponent for Nurmagomedov.

I'd watch. Nates a decent match-up for Khabib.

A parody account dedicated to deciphering Diaz’s tweets wrote: “I believe that Khabib lost a backstage altercation with me.

The torrent of admiration for Nurmagomedov in the aftermath of his victory continued elsewhere, with current Bellator and former UFC featherweight champion Cris Cyborg posting a photo of herself alongside him.

READ MORE:  'I beat a Brazilian cowboy, maybe an American cowboy is next': Shavkat Rakhmonov hints at Donald Cerrone fight after UFC 254 win

“Happy retirement, champ,” wrote Cyborg, adding a word of praise in Arabic to the end of her post.

Henry Cejudo, who was a two-weight champion, added his support after Nurmagomedov paid tribute to his late father and mentor, Abdulmanap, on Instagram.

“Congratulations, my brother,” Cejudo wrote in the comments. “What a journey you and your father took. Only love, my brother.” 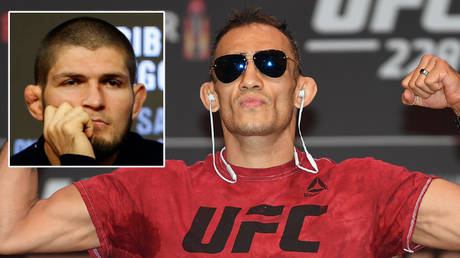