Britain’s Hamilton fought back from a poor start to eventually overhaul teammate Valtteri Bottas before streaking clear to win by a colossal 25.6 seconds in a display of complete dominance over his Mercedes colleague and the rest of the field.

After he crossed the finish line, Hamilton’s race engineer told him over the radio, “You are re-writing the history books,” while team boss Toto Wolff confirmed his landmark stat, exclaiming, “Lewis! 92. 92.”

Hamilton was typically modest after the race as he paid tribute to his Mercedes team, which has dominated the rest of the field throughout the 2020 Formula 1 season.

The world champion said, “I owe it all to these guys here and back at the factory. It’s been such a privilege working with them. Today was tough, but it was all about temperatures.”

Hamilton finished the race in pain after radioing back to the pit to tell them he was suffering with cramp with seven laps remaining. But, despite the discomfort, Hamilton went on to set a series of fastest laps to stamp his authority on the rest of the field in a dominant display.

“I could never have dreamed of being where I am today,” he said.

“I didn’t have a magic ball when I chose to come to this team and partner with great people, but here I am and what I can tell you is I’m trying to make the most of it every single day.

“It’s going to take some time to sink in. I was still pushing flat out coming across the line.”

Hamilton’s success contrasted with his teammate, as Bottas once again had to play second fiddle to the Brit in what has become an increasingly frustrating season for the Finn.

“I was pushing hard but couldn’t go faster,” he complained after the race. 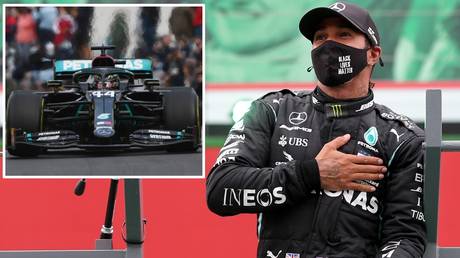