UFC Dana White has revealed that Khabib Nurmagomedov reportedly suffered a broken foot just three weeks before his fight against Justin Gaethje at UFC 254. Khabib submitted Gaethje in the second round of their lightweight title contest in Abu Dhabi, […]

Khabib submitted Gaethje in the second round of their lightweight title contest in Abu Dhabi, extending his perfect record to 29-0 before announcing he would be retiring – citing a promise he had made to his family following the death of his father and trainer Abdulmanap in July.

As the MMA world reacted to the news that Khabib was calling it quits, UFC boss White told the press on Fight Island that it had seemed on the cards given Khabib’s demeanor heading into his contest with Gaethje, while also revealing rumors that the Russian had covered up a foot injury just three weeks out from his octagon date.

READ MORE:  'It was the WORST camp': Khabib coach confesses UFC champion was HOSPITALIZED with MUMPS before missing training with a BROKEN TOE

“I could tell it almost felt like an upset tonight, the way he reacted at the weigh-ins, the way he acted when he was walking out tonight, he didn’t look like himself, taking deep breaths, but wow,” White said.

"Apparently he was in the hospital, he broke his foot."@danawhite says he was told @TeamKhabib broke his foot three weeks before #UFC254 pic.twitter.com/sSVkwYjePl

“What this guy’s been through, we’re all lucky that we got to see him fight tonight, and I’m hearing rumors of other things that you guys didn’t know about.

“Apparently he was in the hospital, he broke his foot. Three weeks ago. Two broken toes and a bone in his foot that’s broken or something. That’s what his corner was telling me.

“He never told anybody, he was walking around. He is one of the toughest human beings on the planet. He’s the number one pound for pound fighter in the world, and seriously you have to start putting him up there for GOAT status with whoever else you think is the GOAT.”

When asked whether he would attempt to talk the 32-year-old Khabib out of retirement, White said he would give the 155lbs champion “time to heal”, but that he would not pressure him to reverse the decision.

“If guys don’t want to fight, they don’t want to fight. Let him take some time off, let him heal, not only physically but emotionally with what he’s going through from losing his father. We’re all lucky we got to see him fight tonight,” the UFC boss said.

Discussing Khabib’s performance against Gaethje – whom many had tipped as Khabib’s toughest-ever test – White said of the lightweight champion: “He is the baddest motherf*cker on the planet.

“The pressure that Khabib puts on you is unbelievable. Literally he didn’t respect his punching power, just walked right into everything, did what he wanted…”

The baddest on the 🌎 #UFC254 pic.twitter.com/rixEBU1odU 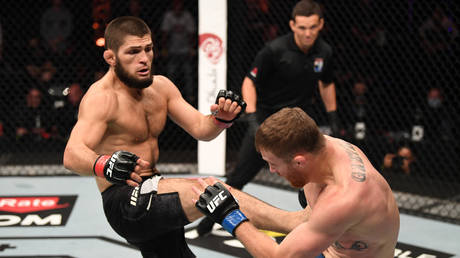