Jon Jones has issued an objection to Khabib’s claim to be considered the sport’s best fighter following his win against Justin Gaethje at UFC 254, saying that Khabib’s achievements don’t rival what he has done in the cage. Nurmagomedov called […]

Jon Jones has issued an objection to Khabib’s claim to be considered the sport’s best fighter following his win against Justin Gaethje at UFC 254, saying that Khabib’s achievements don’t rival what he has done in the cage.

Nurmagomedov called for the UFC to place him in top spot in their pound-for-pound rankings following his second round submission win against Justin Gaethje at UFC 254 on “Fight Island” on Saturday night in a fight Khabib revealed afterward would be his last.

The Russian stretched his winning streak to 29-0 with the win against the dangerous Gaethje, a record unmatched in top-level mixed martial arts and which marks him out as one of the best fighters to have stepped into the age.

“There is only one thing I want from UFC, to put me as No 1 pound-for-pound fighter in the world because I deserve it,” Khabib said to UFC commentator Jon Anik of his final request from the company before retirement – but another fighter in contention for that position isn’t exactly endorsing Nurmagomedov’s campaign.

Until I take that heavily crown, I grant you the spot. 🤙🏾 Enjoy Champ

Jon Jones, the former UFC light heavyweight champion who recently announced his move to the heavyweight fold, has long been considered at, or near, the top of the pound-for-pound rankings for the best part of a decade and doesn’t seem keen to surrender his status to the Russian champion.

Jones initially congratulated Khabib and said that he “granted” him the number one spot, but soon began issuing further tweets in which he suggested that Nurmagomedov’s achievements pale in comparison to his.

I’m just going to ask for the heavyweight championship belt and see if they give it to me. Since we can just ask for things now 🤷🏾‍♂️

If we’re having a popularity contest, I’d gladly take my L. This shit has nothing to do with fame or being a good person. I’ve giving my whole adult life to this game, I owe it to myself to speak up.

Of course, Jones does have a legitimate claim to the title of the sport’s best fighter. Undefeated in his career (except for a bizarre DQ defeat to Matt Hamill in 2009), Jones’ prodigious talent was obvious when he made his UFC debut less than a year after his first training session.

He became the youngest UFC champion in history when he defeated Mauricio ‘Shogun’ Rua in March 2011 to claim the light heavyweight title and has defeated every man to have faced him ever since.

However, Jones’ career has been clouded by several incidents and arrests outside the cage which threatened to derail his career. Nonetheless, he says the evidence of his career speaks for itself.

I’ve won 15 world titles, he just won his 4th. The fact that this is even a conversation is mine blowing to me. https://t.co/DiJQ4X5vjl

I got signed by the UFC literally nine months after my very first MMA practice. Unheard of

I understand most people have never been number one in their community, state, let alone the world. My competitive nature won’t allow me to just stand by and see someone ask to be considered the best. I’ve sacrificed too much blood https://t.co/EmGRKpgmso

“The saddest thing about this situation is that the company is probably going to honor his request and demote me. It will be insulting but not much of a surprise. I’ll just use it as motivation,” Jones wrote, while also insisting that he wasn’t “salty” as a result of the accolades being bestowed upon Khabib.

“Not salty at all, I really do respect Khabib, I honor the type of man he is. But being the best is earned not given. Unfortunately, four title fights ain’t it, no matter how much we all like em.”

The UFC’s post-UFC 245 rankings are due to be released early this week and all will be revealed as to which of the UFC’s most dominant champions will be considered as the company’s best fighter. 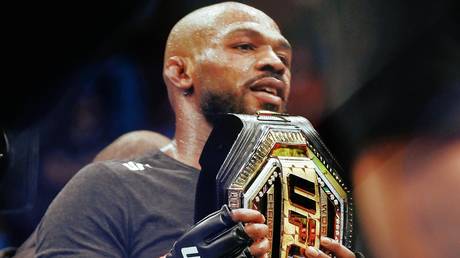