Russian giants Zenit St. Petersburg have moved swiftly to play down reports that they are targeting ex-Premier League boss Mauricio Pochettino to arrest a poor run of form under current coach Sergei Semak. Reports from Championat had claimed that UEFA Champions […]

Russian giants Zenit St. Petersburg have moved swiftly to play down reports that they are targeting ex-Premier League boss Mauricio Pochettino to arrest a poor run of form under current coach Sergei Semak.

Reports from Championat had claimed that UEFA Champions League finalist Pochettino, who was sacked by Tottenham in November 2019 after five-and-a-half largely successful years in charge, has already been contacted by the club with a view to taking over from Russian boss Semak.

The story said that Pochettino would be offered a hefty $6.5 million each year alongside bonuses as part of a deal to lure him to the Gazprom Arena, adding that a club source had confirmed the approach and that the longlist to replace Semak was being drawn up behind his back.

Zenit will almost certainly have been attracted to Pochettino because of his impressive run to the Champions League final with Spurs in 2019.

Zenit St. Petersburg are holding talks with Mauricio Pochettino over a €6.5m-a-year deal to become trainer, according to Championnat #MUFC #Spurs #Zenit
https://t.co/hXMvrl8sy8

While 44-year-old Semak has guided them to the league title twice, they finished bottom of their Champions League group last season and made a shaky start to the current campaign by losing 2-1 at home to Belgian side Club Brugge on Tuesday.

Their bad run continued with a defeat by the same scoreline at home to midtable Rubin Kazan on Saturday, leaving them three points behind Russian Premier League leaders Spartak Moscow ahead of a foreboding trip to Borussia Dortmund in Europe on Wednesday.

However, Zenit’s sporting director Javier Ribalta has reportedly moved to dismiss the reports.

UPDATE: Zenit Sporting Director Javier Ribalta has since come out and rubbished these claims on his Twitter. https://t.co/Am9TTWFkqI

Pochettino has been linked to several high-profile roles since his abrupt departure from Spurs, including taking over at Spanish champions Real Madrid and Premier League heavyweights Manchester United.

The former Southampton and Espanyol coach is still being paid an annual salary of around $11 million by Tottenham until he accepts another job.

Former Russia and England coach Fabio Capello warned that the squad available to Pochettino could dissuade him from making the move.

READ MORE:  'Many are inappropriate': UFC starlet Liana Jojua says she receives CRAZY messages from fans as she prepares for battle at UFC 254

“Pochettino is really a very good coach,” he said. “But sometimes that’s not enough if the players aren’t that good.

“There is a lot to do if [Zenit] want to be competitive in the Champions League or the Russian Premier League.

“Is it real? I don’t think so. Pochettino does not need money – he will try to find something new.

“But Mauricio could have brought something new to the team because Tottenham Hotspur played very well with him.” 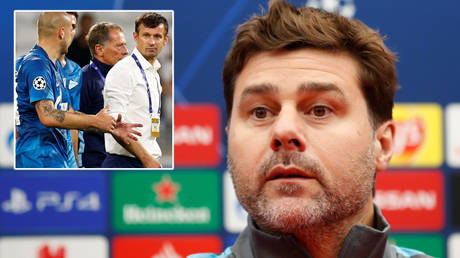