When Liana Jojua steps into the octagon on UFC Fight Island, she’ll have an army of fans cheering her on, but the Georgian starlet admits that some of her supporters take things a little too far on social media. The […]

When Liana Jojua steps into the octagon on UFC Fight Island, she’ll have an army of fans cheering her on, but the Georgian starlet admits that some of her supporters take things a little too far on social media.

The 25-year-old flyweight will take on newcomer Miranda Maverick in the second fight of the event at UFC 254 in Abu Dhabi, and she is hopeful of claiming her second victory in the UFC.

Jojua lost her octagon debut to Sarah Moras at UFC 242 in Abu Dhabi last year, but bounced back in her most recent fight in the UFC, defeating Diana Belbita via first-round armbar on Fight Island in July.

Now the fighter known as the “She-Wolf” is looking to register back-to-back wins on Yas Island when she takes on Maverick on UFC Fight Pass, but she admitted that she’s stopped checking her Instagram DMs for supportive fan messages, as her increasing fame has led her to receive some messages she’d rather not receive.

“I don’t even go there already!” she told Sport24 (via translation).

“Even my friends there do not always answer, they take offense at me. They say, ‘Where did you go?'”

Jojua also explained that she rarely answers messages from people she doesn’t know, and revealed that “many are inappropriate.”

“‘Hit me in one place,’ they wrote, and even offered to pay for it. I thought, ‘What’s wrong with you guys?’ I try not to read that because it scares me. Although, there are funny things. For example, recently a guy sent a voice message: ‘Liana, you gave me a painful heart.’ I almost died laughing!”

But, while Jojua is still getting used to the attention of being a rising star of the UFC, her focus is fully fixed on picking up the ninth win of her professional MMA career with victory on “Fight Island.”

The last time she won in the UFC, Khabib Nurmagomedov successfully defended his title in the main event. Now she’ll be hoping for a similar outcome when she shares the fight card with Khabib once again. 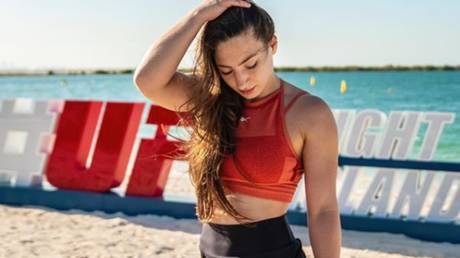