Following the news of Khabib Nurmagomedov’s retirement, thoughts quickly turned to what might happen next, with new UFC signing Michael Chandler pitching the idea of a tournament to determine Khabib’s successor as UFC champion. Former three-time Bellator lightweight champion Chandler […]

Following the news of Khabib Nurmagomedov’s retirement, thoughts quickly turned to what might happen next, with new UFC signing Michael Chandler pitching the idea of a tournament to determine Khabib’s successor as UFC champion.

Former three-time Bellator lightweight champion Chandler signed for the UFC last month and was immediately drafted in as a backup fighter for the lightweight title fight at UFC 254.

The American made weight with ease and fulfilled all of his media obligations, but wasn’t needed on fight night as Khabib took on and defeated interim champion Justin Gaethje.

But, following Khabib’s shock retirement announcement after his victory, Chandler offered a solution to the UFC as they look to plan for life at lightweight, post-Khabib.

“I did mention Tony Ferguson’s name and we were talking about January, but now we’ve got Justin Gaethje in here talking about eight weeks from tonight wanting to fight for a title. Let’s be honest: I’m the new guy. I’m not going to come in here and say, ‘Hey guys I deserve a title shot.’ I’d love my name to be thrown into the mix.”

Confident in his abilities, but aware of the need to earn his shot in the UFC, Chandler then went on to suggest a solution to crown a new champion – a lightweight title tournament.

“I’d love the opportunity to fight in a four-man tournament for that title,” he said.

“Conor, Poirier, myself, Ferguson. There’s some names that need to be fighting for a title, so let’s make it happen.”

The problem with that idea is that it doesn’t include the man who just fought for the title. Gaethje has made clear his desire to bounce back as swiftly as possible, so he’s sure to be a part in whatever the UFC has planned for the coming months.

But the arrival of Chandler, a prodigious wrestler with bonafide knockout power, means there is a new force in the UFC’s 155-pound division.

READ MORE:  Cricketer Hassan Ali and his wife Samia Arzoo is expected to give birth to his first child

It remains to be seen how he’ll slot into the title picture in the UFC, but one thing seems clear, with Khabib now retired, the race for the vacant title at 155 pounds is on, and there’s a host of contenders eyeing the gold. 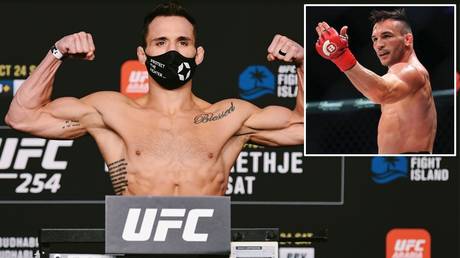