Khabib Nurmagomedov extended his perfect professional record to 29-0 with a submission win over Justin Gaethje, then announced his retirement from the sport at UFC 254 on “Fight Island.” Nurmagomedov, the strong favorite going into the fight, proved the bookmakers […]

Khabib Nurmagomedov extended his perfect professional record to 29-0 with a submission win over Justin Gaethje, then announced his retirement from the sport at UFC 254 on “Fight Island.”

Nurmagomedov, the strong favorite going into the fight, proved the bookmakers correct as he outlasted the game American challenger Gaethje, a fighter who had been considered among the sternest tests for the Russian’s 155lbs title, defeating him by second round triangle choke in the UFC 254 main event on ‘Fight Island’ in Abu Dhabi.

In the end, the result of the fight was the same as each one before it: Nurmagomedov moved to an undefeated 29-0 but it is a record which looks to be fixed in stone after the champion announced in the moments after the fight that he was retiring from mixed martial arts.

Despite the relatively swift finish, Khabib certainly didn’t have it easy. Gaethje, a decorated wrestler in his own right, forced Nurmagomedov into some close exchanges and regularly threatened with debilitating leg-kicks and the type of thunderous power shots which proved so effective in his last victory against Tony Ferguson.

Nurmagomedov, though, was laser-focused. Towards the end of the first round, his increasingly crisp boxing began to edge the striking in his favor and he ended the first round in top position, threatening with an armbar submission – two factors which would have been immediately concerning to Gaethje’s team.

The second looked to be following a similar trend to the first: both men throwing heavy shots, while Khabib moved forward ruthlessly. Nurmagomedov soon found himself in top position again though, and this time Gaethje was unable to stop what was coming next.

Khabib applied a mounted triangle choke from top position before torquing the position further, with Gaethje signalling he had had enough moments later.

Immediately after the win, Nurmagomedov dropped to his knees and wept as he fought for the first (and only) time outside the tutelage of his late father Abdulmanap, who passed away due to complications of Covid-19 earlier this year. Backed by his team, Khabib motioned for them to help him remove his gloves – a universal symbol of a combat sports retirement and soon confirmed as such to UFC commentator Jon Anik.

“Today I want to say this was my last fight,” Nurmagomedov said. “No way I’m going to come here without my father. It was first time after what happened with my father, when UFC called me about Justin, I talk with my mother three days. She doesn’t want me to go fight without my father but I promised her it was going to be my last fight.

“If I give my word, I have to follow this. It was my last fight here.”

Nurmagomedov retires from the sport with an unparalleled record of 29-0, and becomes the first and only UFC champion to step away from the sport undefeated. 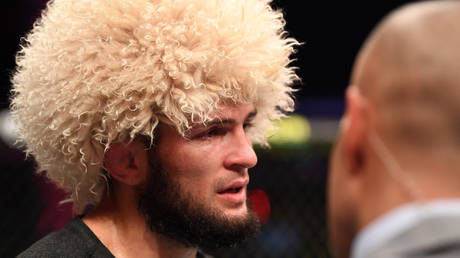