Khabib Nurmagomedov started his training camp in hospital with mumps and broke his toe in his second sparring session ahead of his title win over Justin Gaethje, coach Javier Mendez has admitted in an astonishing new interview. Long-serving Mendez had […]

Khabib Nurmagomedov started his training camp in hospital with mumps and broke his toe in his second sparring session ahead of his title win over Justin Gaethje, coach Javier Mendez has admitted in an astonishing new interview.

Long-serving Mendez had an even greater responsibility than usual in the absence of Nurmagomedov’s late father, Abdulmanap, for the first time as the Russian faced Gaethje at UFC 254 following 13 months away from the Octagon.

In a nightmare build-up to the meeting that would seal Nurmagomedov’s legacy, the lightweight great initially fell ill before appearing as a guest of honor at the inaugural MMA tournament held to honour his father in Moscow on September 9.

“He got the mumps, I guess, the day before his father’s event in Russia,” Mendez told Submission Radio. “So he came [to camp] with the mumps and he tried training a couple of days, really light.

“But then he got so sick he had to be hospitalized. He was in the hospital for three days. He comes out, and I’m like going, ‘I’m really sh*tting, man.

“I’m going, ‘oh man, we’re fighting such a great warrior like Justin and we’re already starting off on a bad foot…this really sucks.”

That choice of words would also accurately describe the problem the 32-year-old suffered shortly after he began sharpening his skills against training partners.

Having had a single week of training after two weeks out with the infection, Mendez was hoping to begin seeing significant improvements when his fighter endured an agonizing toe break.

“We had to get some sparring in because without sparring you don’t know where you’re at,” he explained. “We have one sparring session.

“He looked OK. Not how I wanted him to look, but he looked OK. And the second sparring session he was looking great, and all of a sudden, midway in the second round, boom, he stops.

“I go, ‘what the heck happened?’ Broke his freaking toe. Now we have to wait more time for him to heal before we can start training again. So that really jacked everything up.”

Some fans had speculated that Nurmagomedov looked relieved when he weighed in on Friday, although there had been little inkling that the Dagestani icon had faced a succession of setbacks that would have proved catastrophic for many fighters.

Mendez believes that Nurmagomedov’s remarkable mental strength allowed him to produce a dazzling performance to end his 30-fight UFC career unbeaten after retiring during post-fight scenes that were just as memorable as his second-round victory.

“Six days out before the event, he said, ‘coach, my toe may be broken, but my mind is not,'” recalled confidante Mendez.

“We worked on stuff like that forever from his father. To me, when he said that my mind is not [broken], we knew that we were winning this fight, no matter what.

“We had the worst luck ever for this camp. It was incredible how bad it was.

“Every camp has problems and we had our share in this one. But he was ready, mentally and physically, to go.”

Final sparring sessions with Usman Nurmagomedov, Khabib’s rising lightweight cousin who Mendez described as “a phenom”, also inspired confidence of the crushing comeback win that would arrive on Fight Island.

“In those last sparring sessions, he looked fantastic,” said Mendez.

“If things didn’t go my way, you wouldn’t hear me talking about this – because then we’re crying sour grapes and I didn’t want to do that.

“But [because] he did win, I’m just stating the facts. It was the worst camp for us in regards to injuries and stuff.” 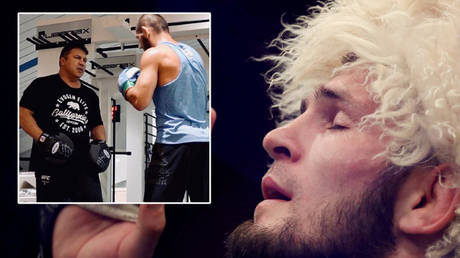