An emotional Khabib Nurmagomedov announced his immediate retirement from the sport after securing a submission win over Justin Gaethje at UFC 254, revealing he had made a promise to his mother before accepting the fight. After the victory announcement was […]

An emotional Khabib Nurmagomedov announced his immediate retirement from the sport after securing a submission win over Justin Gaethje at UFC 254, revealing he had made a promise to his mother before accepting the fight.

After the victory announcement was made and he was presented with his UFC championship belt, Khabib asked his cornermen to cut off his gloves and he laid them down in the center of the octagon in the traditional gesture made by fighters announcing their retirement.

Then, he told UFC commentator Jon Anik that he was retiring from the sport.

“It was my last fight. Ain’t no way I’m going to come here without my father,” he said.

“It was the first time, after what happened with my father, when the UFC called me about (fighting) Justin, I talked with my mother (for) three days. She didn’t want me to fight without father, but I promised her it was going to be my last fight, and if I give my word, I have to follow this. It was my last fight here.”

Khabib then made a final request of the UFC, as he stated his wish to finish his career with the UFC knowing that he had achieved his goal of reaching the No. 1 spot in the promotion’s pound-for-pound rankings list, which are announced every Tuesday.

“I know only one thing I want from the UFC. Tuesday, you guys have to put me number-one pound-for-pound fighter in the world, because I deserve this,” he said.

Then he addressed his fallen opponent, who had stayed in the octagon to pay respect to the Russian as he made his retirement announcement.

“Thank you so much, Justin. 2016 I remember when I cut weight, you helped me a lot. Thank you, brother,” he said, referencing the time that Gaethje had helped him cut weight ahead of his short-notice fight with Darrell Horcher four years ago.

“Be close with your people, because you never know what’s going to happen tomorrow. You never know.” 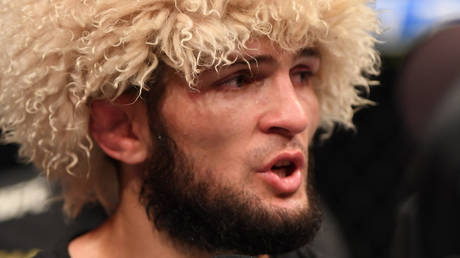