Khabib Nurmagomedov believes Ukrainian cruiserwight Oleksandr Usyk is one of three men who can challenge heavyweight king Tyson Fury for the title of best pound-for-pound boxer, alongside Vasiliy Lomachenko and Canelo Alvarez. The man had competed to be the UFC’s […]

Khabib Nurmagomedov believes Ukrainian cruiserwight Oleksandr Usyk is one of three men who can challenge heavyweight king Tyson Fury for the title of best pound-for-pound boxer, alongside Vasiliy Lomachenko and Canelo Alvarez.

The man had competed to be the UFC’s pound-for-pound best fighter initially forgot about British WBC champion Fury when he was asked to name the best fighters in the sport, correcting himself before admitting that he “really wants” to watch unbeaten Usyk try to become the first man to beat him.

Praising Usyk’s skills ahead of his fight with another UK boxer, Dereck Chisora, on Saturday, retired Russian lightweight Nurmagomedov said the first cruiserweight to hold all four major belts could trouble tactician Fury.

“I really want to see Usyk vs Fury. It’s going to be a very good fight. [Usyk] has very good skill and technique, Tyson Fury too.

“He is not like other heavyweights: more technique, his footwork is very good, his conditioning is very good. I really want to watch Usyk against Fury.”

Former three-weight title holder Lomachenko lost on a decision in a lightweight contest against Teofimo Lopez in Las Vegas earlier this month for only the second defeat of his career.

Canelo has appeared to be in limbo this year and is currently embroiled in a legal battle with DAZN over his record-breaking deal with the US broadcasters.

The current official pound-for-pound number one has claimed that he is frustrated at his inactivity, having not fought since he beat Russian Sergey Kovalev to win the WBO light heavyweight crown in November 2019.

Fury is just behind Canelo in BoxRec’s rankings, while Lomachenko and Usyk both feature in the top ten according to the four other established lists.

The heavyweight appeared to announce that he had given up on a trilogy fight with most recent victim Deontay Wilder at the weekend, adding that he expected to fight in England on 5 December.

The 32-year-old could fight Anthony Joshua in a lucrative all-British double header next year, although Joshua needs to beat Bulgaria’s Kubrat Pulev at The O2 in London on 12 December first.

“I’m working on some opponents,” Fury told fans on social media on Saturday. “I’ll let you all know who it’s going to be shortly. Watch this space – return of The Mac.” 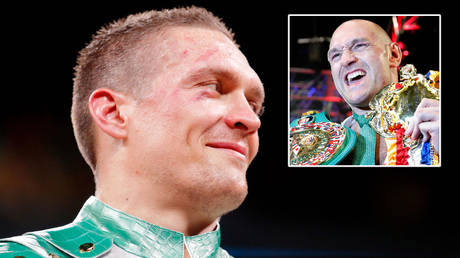