Manchester United midfielder Paul Pogba has reacted with rage to a report that he would quit playing for France over remarks about Islam and terrorism made by President Emmanuel Macron, whose comments have caused religious uproar. Reproducing the headline of […]

Manchester United midfielder Paul Pogba has reacted with rage to a report that he would quit playing for France over remarks about Islam and terrorism made by President Emmanuel Macron, whose comments have caused religious uproar.

Reproducing the headline of a report from English tabloid The Sun, angry World Cup winner Pogba called the story “unacceptable fake news” and accused sections of the media of “abusing their press freedom” while revealing that he had launched a lawsuit.

The outlet suggested that Pogba, who praised his conversion to Islam for making him a “better person” last year, had retired from playing for France in response to a speech by Macron on Friday.

The Sun cited sources in the Middle East in a piece derided by Pogba as “absolutely 100% unfounded news about me” containing “things I have never said or thought.”

“I am appalled, angry, shocked and frustrated,” he told his following of more than 42 million on Instagram.

“Some ‘media’ sources use me to make total fake headlines in the sensible subject of French current events and [have added] the French national team to the pot.

“I am against any and all forms of terror and violence. Unfortunately, some press people don’t act responsibly when writing the news, abusing their press freedom.

“[They are] not verifying if what they write and reproduce is true, creating a gossip chain without caring [if] it affects people’s lives and my life.

“I am taking legal action against the publishers and spreaders of this 100% fake news.”

Macron spoke out after Samuel Paty, a 47-year-old teacher, was beheaded in a horrifying attack after he had shown pupils offensive images of the prophet Muhammad.

Paty was awarded the French Legion d’honneur, the highest honor awarded by the French state, in recognition of his tragic death after trying to explain the importance of freedom of speech.

The president said: “Unity and firmness are the only answers to the monstrosity of Islamist terrorism.”

Neither Pogba nor the French Football Association responded when asked about the purported sources, but the champion with his country in Russia in 2018 was unequivocal in his reaction to the story.

“In a quick shout-out to The Sun, who normally could not care less: some of you guys probably went to school,” he continued.

“[You] will remember how your teacher said to always check your sources. Don’t write without making sure.

“But hey, seems you did it again and [on] a very serious topic this time. Shame on you.”

Pogba is almost constantly in the headlines in the sports sections of newspapers in the UK, where he became by far the most expensive player ever signed by an English club when United spent around $122 million on him in 2016.

Speaking about his faith following a pilgrimage to Mecca in 2019, Pogba told The Times: “It’s everything. That’s what makes me thankful for everything.

“It made me change, realise things in life. I guess, maybe, it makes me more peaceful inside.

“Islam is not the image that everyone sees – terrorism. You get to know it. Anybody can find that he feels connected with Islam.

“I was questioning myself in a lot of things, then I started doing my own research. I prayed once with my friends and I felt something different. I felt really good.

“It’s really a religion that opened my mind and that makes me, maybe, a better person. You think more about the afterlife.

“This life has a test. Like when I’m with you, here. Even if you’re not a Muslim, you are a normal human. 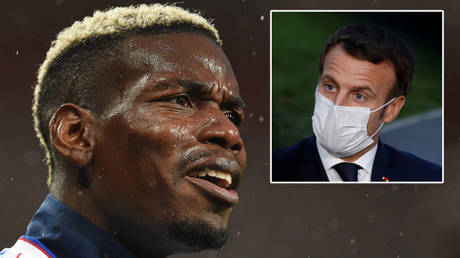