Eight months on from their controversial first meeting, Magomed Ankalaev gained a definitive win against rival Ion Cutelaba with a sensational first-round finish of the Moldovan slugger at UFC 254 on “UFC Fight Island.” Russia’s Ankalaev was declared the winner […]

Eight months on from their controversial first meeting, Magomed Ankalaev gained a definitive win against rival Ion Cutelaba with a sensational first-round finish of the Moldovan slugger at UFC 254 on “UFC Fight Island.”

Russia’s Ankalaev was declared the winner of their first fight in February after landing an early combination of strikes that appeared to daze Cutelaba.

The referee stepped in to call the fight just 38-seconds into the opening frame, prompting furious protestations from Cutelaba who later said that he was feigning injury in a bid to make Ankalaev reckless.

At UFC 254, though, the result was very much the same and Cutelaba can have no reservations about it whatsoever.

As many predicted, the two aggressive strikers both attempted to start on the front foot, which led to numerous early exchanges in the middle of the Octagon.

Ankalaev landed the first truly telling strike, catching Cutelaba in transition with a punch which sent him spinning to the canvas. He quickly rose to his feet but the pendulum had clearly swung towards the Russian, who would soon find further opportunities to test his opponent’s chin.

The end, which came with around 40-seconds left in the first round, was a result of a right hook to left straight combination which toppled Cutelaba once more. A barrage of follow-up strikes on the ground convinced the referee to call off the fight, this time thankfully free of controversy.

Bearded guy with "Magomed" in his name, we already know who's winning

I think he’s not pretending this time😬

Oh my word. As expected, Ankalaev-Cutelaba ends in violent fashion.

Ankalaev improves his record to 15-1 overall, and 5-1 in the UFC, with a performance that will surely prompt an uptick in competition as he looks to navigate a path into the UFC’s light heavyweight top ten.

And, according to the reactions on social media, his entry in the elite list of fighters at 205 pounds could be the first step to become Russia’s latest UFC champion.

Ankalaev is a problem and I hope he gets the push he deserves. He'd destroy several names in the top 10 right now.

Ankalaev is a BEAST!!! What an exciting future he has in the division 👏🏼#UFC254

“Ankalaev is a BEAST!” said UFC commentator John Gooden, while regular MMA tweeter @Grabaka_Hitman described the rising Russian contender as a “problem,” and said he hopes he “gets the push he deserves.”

After such a big finish, a big-name opponent surely awaits for Ankalaev, who improved his professional record to 14-1, extended his win streak to five, and claimed his third straight finish inside the octagon. 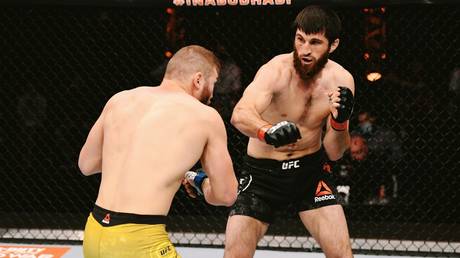