After weeks of uncertainty, surging star Khamzat Chimaev finally has his next octagon assignment after UFC boss Dana White confirmed that a deal has been struck for “Borz” to fight top welterweight contender Leon Edwards. Chimaev has been incredibly vocal […]

After weeks of uncertainty, surging star Khamzat Chimaev finally has his next octagon assignment after UFC boss Dana White confirmed that a deal has been struck for “Borz” to fight top welterweight contender Leon Edwards.

Chimaev has been incredibly vocal since winning his first three UFC fights in the span of just 66 days, calling out well-respected names from numerous weight classes. But White says that the Chechen-born Swede can finally begin to concentrate on his next contest after confirming that he will face England’s Edwards in a UFC main event in December.

“We just got a deal done [Thursday] for Leon Edwards vs. Chimaev,” White told The Jim Rome Show.

“They will fight. It will be a great fight and he can stop calling everyone out on Twitter now. He’s got an opponent.”

After debuting in the UFC on “Fight Island” with a whitewashing of Welsh striker John Phillips, Chimaev moved down to the welterweight division for a fight with UFC debutant Rhys McKee in a fight that saw him produce a similarly dominant performance.

Chimaev followed up his back-to-back wins in Abu Dhabi with a stellar showing in Las Vegas in December as he knocked out experienced middleweight veteran Gerald Meerschaert in just 17 seconds last month.

Edwards, meanwhile, has long been considered an elite fighter near the summit of the welterweight division. Despite winning eight straight fights at 170 pounds, he was removed from the UFC’s official welterweight rankings this week due to “inactivity” having not competed in the cage since a July 2019 win against Rafael Dos Anjos.

However, since then Edwards’ campaign for a top-contender fight has fallen by the wayside for a variety of reasons. A London main event against former champion Tyron Woodley was nixed due to the onset of the coronavirus pandemic, a factor that also forced Edwards out of a potential world title with Kamaru Usman weeks later.

READ MORE:  By the numbers: Exploring Khabib Nurmagomedov's impact in his record-breaking eight-year spell with the UFC

But now, two of the UFC’s most vocal welterweights have been drawn against one another. And, despite the disagreements about the rankings (Edwards was reinstated as the third-ranked welterweight following news of the Chimaev fight), White says that this will be a giant opportunity for either man to stand themselves out from the crowd of contenders – and particularly so if Chimaev continues the blistering start to his UFC career.

“This guy [Chimaev] had 30,000 followers in his first fight, he has almost a million followers now,” White said.

“He’s a nice guy, but I would say he’s a super confident version of Khabib,” White said.

“This guy wants to fight everybody. He doesn’t care and he’ll move up one weight class, two weight classes. When you’re a fight fan, those guys are fun. You love guys who want to fight like that, that want to become the best fighter in the world in multiple weight classes, or you’re the guy that wants to see that guy lose. It’s good in every way shape or form.”

The specifics of the Chimaev vs. Edwards bout have yet to be revealed but it is expected feature as the main event of the UFC’s planned Fight Night card on December 19. The location of the card has not yet been revealed, though it is expected to be the UFC Apex in Las Vegas. 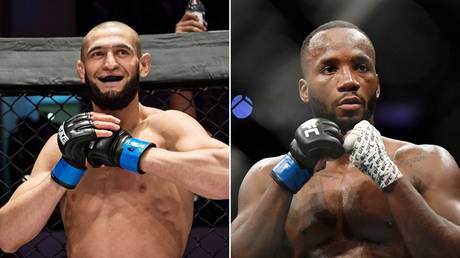