The MMA world has reacted with a mixture of shock and admiration after Khabib Nurmagomedov announced he was retiring after submitting Justin Gaethje to retain his lightweight title at UFC 254 in Abu Dhabi. Khabib defeated interim champion Gaethje in […]

The MMA world has reacted with a mixture of shock and admiration after Khabib Nurmagomedov announced he was retiring after submitting Justin Gaethje to retain his lightweight title at UFC 254 in Abu Dhabi.

Khabib defeated interim champion Gaethje in the second round via triangle-choke submission on Fight Island to extend his unblemished professional record to 29 fights, before announcing in the cage that it would be his last bout.

Visibly emotional, Khabib spoke of the toll of losing his father and trainer Abdulmanap to coronavirus complications in July, revealing that he had promised his mother that this would be his last contest.

Immediately after hearing, the news the MMA world reacted to the Dagestani’s dominant performance against Gaethje as well as the realization that they would never see him in action in the octagon again.

Former two-weight UFC champion Daniel Cormier – Khabib’s friend and teammate at the American Kickboxing Academy, and who was calling the action cageside for the UFC – hailed him as “the greatest champion in UFC history.”

Congratulations to the greatest champion in @ufc history. What a career, we are forever grateful for the time we got to spend with you my brother. 29-0 undefeated and undisputed. #weareaka #eaglesmma #fathersplan #heissoproud ⁦@TeamKhabib⁩ pic.twitter.com/uXjiT34JuV

UFC commentator and podcast megastar Joe Rogan likewise stated that Khabib was the greatest ever to do it.

Outstanding champion, incredible career and amazing achievements. Congrats and all the best outside the Octagon @TeamKhabib! https://t.co/Ze2CZrcSqT

The best to ever do it @TeamKhabib

Former light heavyweight champion Jon Jones – a man rated by many as among the contenders for GOAT status – also congratulated Khabib.

I want to congratulate Khabib for an outstanding career. I know he made his father along with millions of fans around the world incredibly proud today. May God continue to bless him on his journey.

A legacy like no other! Thank you @TeamKhabib #UFC254 pic.twitter.com/GGqpGjJluR

A king, now and always. pic.twitter.com/t2W2KgyoCI

Former UFC fighter-turned-pundit Dan Hardy called Khabib’s performance against Gaethje – whom many had tipped as his most dangerous opponent to date – “one of the greatest performances” he had seen in the octagon.

Unreal. One of the greatest performances I’ve ever seen. 🙏🏼 #KhabibTime

MMA fans also poured onto social media to praise Khabib, with one writing that the Dagestani grappling phenom had “always taken the sport and the organization on his own terms.”

All respect to Khabib for always taking the sport and the organization on his own terms. Never allowed himself to be pressured into fights, didn't give a shit for chasing the Conor $$$. People will always want more, but if he decides that's enough then it's enough.

Khabib took the piss out of the light weight division and dipped, certified goat

Others said Khabib “would have done his father proud” with his performance in Abu Dhabi.

You have made your father proud champ ❤️ @TeamKhabib pic.twitter.com/ZIViPVF8mr 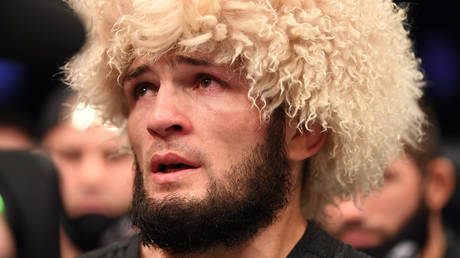