Former Brazil playmaker Ronaldinho has been forced to pull out of a meet-and-greet event with fans in Brazil, revealing a positive diagnosis for COVID-19 after taking a test at the request of sponsors who had paid him to be there. […]

Former Brazil playmaker Ronaldinho has been forced to pull out of a meet-and-greet event with fans in Brazil, revealing a positive diagnosis for COVID-19 after taking a test at the request of sponsors who had paid him to be there.

Car company Auto Truck had promised customers that national icon Ronaldinho, who was released from house arrest in Paraguay in August, would appear at a members’ referral event in the Brazilian city of Belo Horizonte on Sunday.

The commercially-savvy ex-striker had been due to sign footballs and chat to supporters, but left them disappointed after the firm asked him to take a test for CCOVID-19 shortly before his scheduled appearance.

In a video message on one of the company’s Instagram channels, the 40-year-old said: “Hello friends, family, fans.

“I came to participate in the event and, at Auto Truck’s request, I did the tests and I tested positive for COVID.

“I’m fine – asymptomatic –  and everything is fine but we’ll have to leave the event soon.

“Soon we will be there together. A big hug for you and I hope you are all well.”

Ronaldinho’s backers had pledged to provide “incredible experiences” on the day with the 2002 World Cup winner.

READ MORE:  MAQB: Kyle Shanahan's Secrecy Over the No. 3 Pick Is Fun

He had been due to make one of his first public outings since spending more than a month in jail and four months detained in a hotel.

The former Barcelona striker was stopped for entering the country with a false passport as he tried to attend various events in Paraguay, including the launch of his autobiography, a ceremony to support a school for poor children and the inauguration of a casino.

He is now reportedly isolating in the city, with his hosts telling members that the event will go ahead once he has been given the all-clear.

Earlier this month, Ronaldinho posed in a masking bearing a silhouette of a footballer while urging his following of more than 52 million to follow and support World Health Organization guidelines and relief efforts.

He visited the new stadium of one of his former clubs, Atletico Mineiro’s stadium, in Belo Horizonte following his release from house arrest.

Fellow great Pele exchanged messages with him on Instagram on Friday after Ronaldinho wished the legendary striker a happy 80th birthday.

A club legend, hero and football icon loved by many across the entire world. We want to wish Ronaldinho a very speedy & healthy recovery from coronavirus.❤️ pic.twitter.com/ol53UWAEBL

He told Pele: “Congratulations to the unique and incomparable, the king.

“All health and happiness in the world for you. Thank you for everything you did and represented not only in football, but also off the pitch. Long live the king.”

Fans were quick to offer their support and well wishes to the 2005 Ballon d’Or winner after discovering that he had withdrawn from the meeting with fans.

READ MORE:  With Masterful Market Maneuver, the Braves Retain Their Slugger at a Reduced Salary

“A club legend, hero and football icon loved by many across the entire world,” said a Barcelona account on Twitter.

“We want to wish Ronaldinho a very speedy and healthy recovery from coronavirus.” 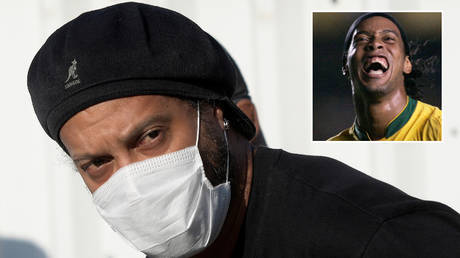