A conspiracy theory is brewing online following Friday morning’s UFC 254 weigh-ins on ‘Fight Island’ as some fans suggest that an athletic commission official didn’t accurately register Khabib Nurmagomedov on the scales. Nurmagomedov was officially announced as weighing in at […]

Nurmagomedov was officially announced as weighing in at the lightweight championship limit of 155lbs in the opening minutes of the weigh-in window, with the Russian champion appearing gaunt and unsteady on the scales after admitting that he had to endure cutting TWENTY pounds in the days leading up to Saturday’s main event fight with Justin Gaethje.

Having experienced issues with cutting weight in the past, most fight fans appeared relieved that one of the final hurdles before this weekend’s massively-anticipated clash had been successfully crossed – but that hasn’t stopped some from suggesting that there was some underhanded tricks at play.

And what might these be? As soon as Khabib set foot on the weighing scales, the official manning it moved to measure his weight – but appeared to stop the process early and while the bar was still moving upwards, suggesting that the Russian may have been heavier than his announced weight.

The footage was noted by ESPN reporter Ariel Helwani, who described the process as a “veteran move” by the official, which soon led to a brigade of online sleuths attempting to undertake a CSI-style review of the tape.

Others, however, have noted how the official in question appeared to act in the same way with all of the fighters who weighed in on Friday.

ICYMI. Khabib and Gaethje made weight earlier today. Both 155. Khabib was first.

(That’s a veteran move by the official manning the scale, eh?) pic.twitter.com/oukFztLLza

Time line -vs- weight judges hands… he would have been heavy if the weight judge wouldn't have flipped the small bar that stops the weight bar from rising up… complete BS ! Hope JG takes that 0 now for sure ! pic.twitter.com/luH5F7V68I

I clipped it and slowed it down. Very suspect. pic.twitter.com/xKHr5Scgmo

He did it the same way for every fighter. Go watch the whole weigh ins

Combat sports has traditionally seen all sorts of tomfoolery on the scales over the years as fighters attempt to gain an advantage on the scales or cover up a bad weight cut. Two such incidents have occurred in the UFC in recent times, with Khabib’s American Kickboxing Academy teammate Daniel Cormier accused of gaining an unfair advantage by holding the towel as he weighed in for his UFC 210 light heavyweight title bout with Anthony Johnson.

Almost exactly a year ago UFC middleweight Kelvin Gastelum faced similar allegations after weigh-in footage appeared to show him ‘leaning’ on the shoulder of his coach Rafael Cordeiro in advance of his fight with Darren Till.

Ultimately, none of these issues are open to any practical debate as by the time any inquest may come the fighters in question will have rehydrated, making any subsequent measurement of their weight a moot point.

However, regardless of any shenanigans on the scales, most fight fans aren’t allowing the issue to detract from what many expect to be a titanic tussle between the world’s premier lightweight fighters.

Am I 100% certain Khabib made 155lbs without any issues with the scale? No.

Do I care if he was a little off? pic.twitter.com/AM3yWvx5sr

We should probably cancel this fight, guys. I for one won't be watching now. https://t.co/D9DT3t3x4M

If Khabib were that worried and — if, as Twitter says, .5-1 lb over — why was he the first to the scale?

So with the fight now official and any means of determining what actually happened now firmly behind us, perhaps it is best to consign Khabib’s UFC 254 weigh-in to the other best-kept secrets of MMA folklore: Did Stipe Miocic tap against Alistair Overeem? Did Lee Murray really KO Tito Ortiz in a streetfight in London? Is Yoel Romero actually a genetically-engineered experiment designed by the Cuban government?

The answers to all of these questions are probably best left unsaid. 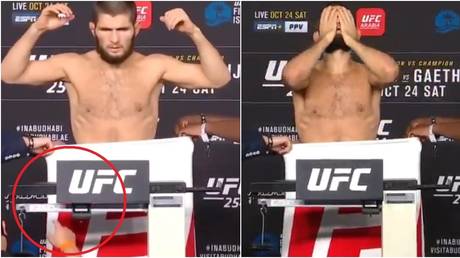