Saturday’s 3-1 home defeat to arch-rivals Real Madrid marked the sixth successive game in which Lionel Messi has failed to score from open play, suggesting the tense accord between the player and club is far from steady. Messi plunged Barcelona […]

Saturday’s 3-1 home defeat to arch-rivals Real Madrid marked the sixth successive game in which Lionel Messi has failed to score from open play, suggesting the tense accord between the player and club is far from steady.

Messi plunged Barcelona into chaos in August when he announced his intention to leave the club on a free transfer prior to the start of the current La Liga season.

The six-time Ballon d’Or winner cited language in his contract which he said guaranteed him the right to leave the club at a time of his choosing.

However, both Barcelona and La Liga disputed this and Messi opted to stay as a potential showdown in court loomed.

Despite initially promising signs, the evidence on the pitch suggests that there remains an imbalance at the Camp Nou. The home defeat leaves the club languishing in 12th place in the Spanish top division, already six points behind league leaders Real Madrid, as the pressure starts to ramp up on new boss Ronald Koeman.

Barcelona have dropped points in three of their first five league games. In addition to the stinging defeat to Real, they could only a muster a 1-1 draw with Europa League specialists Sevilla and also suffered a shock 1-0 reverse to Getafe.

Questions will now be asked of Messi, whose two goals this season have both come from the penalty spot.

While his performance in Saturday’s Clasico showed promise, he was once again heavily marshaled by the Real Madrid backline – with Sergio Ramos expertly quashing one of Messi’s trademark slaloming runs in the final minute of the game.

So far this season, Koeman has been criticized by some – including his French forward Antoine Griezman – for not selecting his players in their most effective positions, something which suggests that the Dutchman hasn’t quite decided how to best deploy his best weapons.

Indeed, with so much of Barcelona’s dominance over the last decade or more reliant on Messi’s consistency of excellence, there will no doubt be concern in the club’s corridor of powers as to what to do should their talisman’s goals dry up.

Messi was the club’s top scorer last season with 31 goals in all competitions – but this was his lowest seasonal tally since the 2007-08 season. Add to that the sale of Messi’s strike partner, Luis Suarez, to Atletico Madrid and Barcelona’s forward options look increasingly anaemic.

However, it must also be noted that Messi’s decline – if we can call it that – is a natural thing for a player in his 34th year, and even Messi has admitted that he will be forced to adapt his game as his age advances.

“I think less and less about scoring goals. I’m starting to step back more and more to be the creator rather than the one who finishes,” Messi said earlier this year.

“Obviously I like scoring, and if I have a chance I’ll take it, but every time I go on to the pitch I’m less focused on scoring goals and more focused on the game. I’ve never been obsessed with goals.

“I understand that people will talk about it when I stop scoring, so many, but that’s part of the game, part of growing as a player and adapting to the times, to be the best player both for yourself and for the team.”

Lionel Messi may not have left Barcelona, but did his goals? 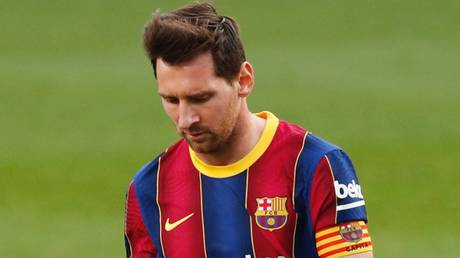