Khabib Nurmagomedov has left an indelible mark on the UFC since his debut with the organization but, after announcing his retirement following a win against Justin Gaethje, the final numbers are in – and they’re rather impressive. With the possible […]

Khabib Nurmagomedov has left an indelible mark on the UFC since his debut with the organization but, after announcing his retirement following a win against Justin Gaethje, the final numbers are in – and they’re rather impressive.

With the possible exception of Georges St-Pierre, no fighter has stepped away from high-level mixed martial arts with quite as impressive a list of achievements.

Nurmagomedov’s 13 performances inside the UFC’s octagon were near flawless: he was never knocked down, never taken down and never even suffered a cut or absorbed a potentially fight-altering blow.

This is all the more impressive when you consider the type of competition he faced.

Khabib’s final three opponents – Gaethje, Conor McGregor and Dustin Poirier – all held versions of UFC gold, and in the case of McGregor and Gaethje, were world champions before they even entered the UFC.

But regardless of the stature of his opponents, Nurmagomedov’s fights almost always followed a similar blueprint: he would take them down and “smash” them.

It seems a simplistic strategy. In a way, it is. But if each of Nurmagomedov’s 29 opponents knew exactly what his intentions were in the cage, they were essentially powerless to stop it.

And so, with one of the greatest fighters to ever step into a cage now retired, we take a look back at some of the more impressive numbers from the Russian’s legendary career.

29 – Fights in his career, 13 in the UFC and 16 in other organizations. Nurmagomedov was victorious in each of them.

11 – The submission of Justin Gaethje at UFC 254 was the 11th such win of Khabib’s career, along with 8 knockouts and 10 decision wins.

2 – The number of rounds Nurmagomedov lost in his UFC career. He lost the third round of his UFC 229 fight with Conor McGregor and, per the official scorecards, was down after the first round of his fight with Gaethje on Saturday.

61 – The amount of takedowns secured by Nurmagomedov throughout his UFC career, including an incredible 21 against Gleison Tibau in 2012.

705 – The number of strikes landed by Nurmagomedov in his 13 UFC contests – an average of just over 54 strikes per fight.

4 – Khabib headlined four major UFC events during his time with the company.

23.8 million – The amount of followers Khabib has on Instagram, an increase of 6.9 million in the past 12 months. The number makes him the most followed Russian figure on the social media platform.

2 – The number of weight classes Khabib has competed in throughout his mixed martial arts career. In addition to his dominance at lightweight, he also has 10 fights in the welterweight division, the most recent of those coming in 2011.

4 – The number of Khabib’s family members who will continue the Nurmagomedov name in the UFC and mixed martial arts (Said, Usman, Abubakar and Umar).

32 years, 1 month and 4 days – Khabib’s age when he announced his retirement from mixed martial arts. To contrast, another UFC legend, Anderson Silva, didn’t make his debut with the organization until he was 33 years old. 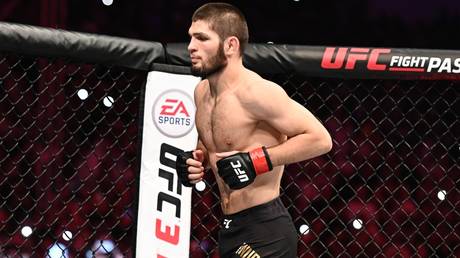