Georges St-Pierre has heralded Khabib Nurmagomedov’s career achievements but says he would “never dare” to call out the now-retired fighter despite being repeatedly linked to a bout with the UFC lightweight champion. Former two-weight UFC world champion St-Pierre was something […]

Georges St-Pierre has heralded Khabib Nurmagomedov’s career achievements but says he would “never dare” to call out the now-retired fighter despite being repeatedly linked to a bout with the UFC lightweight champion.

Former two-weight UFC world champion St-Pierre was something of a subplot heading into Saturday’s UFC 254 main event between Nurmagomedov and Justin Gaethje, with the legendary fighter appearing open to speculation in the media that Khabib would seek a legacy-defining showdown with the French-Canadian to finish his career with a perfect 30-0 record.

Instead, Khabib surprised everyone with the exception of his closest family members by tearfully announcing his retirement moments after his second-round submission win on “Fight Island.”

And, with the potential for what would have been a lucrative fight with the unbeaten Nurmagomedov dead in the water, St-Pierre told ESPN that he believes Khabib’s legacy is already secure and said how impressed he was with his “perfect” career.

“As a human being, I am very very happy for him. What a great career. What a great way to leave with a perfect legacy,” St-Pierre said.

“Now the doors are all open for him. He finished on top. His stock is at its pinnacle. He can do whatever he wants. Sponsorship, publicity, open a school, acting, whatever he wants to do, the possibilities are endless.

Congratulations to @Teamkhabib for his amazing performance last night and a career as perfect as you can get as an athlete! pic.twitter.com/2zwVgCMlRX

“A lot of fighters in our sport have a tendency to finish too late in their career. So their stock is going down, and then they close the door for many opportunities that a lot of elite athletes could have as an after-career. Khabib has a choice now.

“Khabib did an amazing decision.”

St-Pierre admitted that he was very interested in ending his own retirement to fight Nurmagomedov but said that the specifics of the Russian’s decision to end his career mean that he won’t be issuing any challenges.

“Maybe normally, I would (challenge him), but because of the circumstances, I would never dare to do that,” St-Pierre said.

“I am not in his shoes, he is going through a tough time because his father passed away. He needs time to mourn his father.  I respect Khabib a lot. What we do is a sport. This goes beyond sport, goes on to the human side and I just wish him and his family the best.” 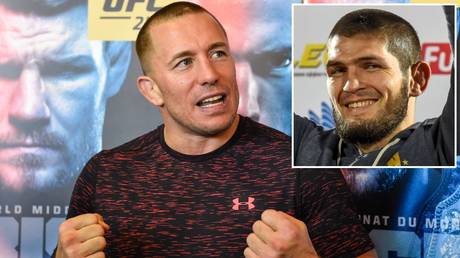