This video answers the question of what happens when Queen Elizabeth II dies and Prince Charles becomes the new king. Operation London Bridge is a name for British protocols that must be followed when Queen passes and Prince Charles come to the throne. This video touches the important parts of this protocol as we know it. Britain has been preparing for Queen's demise since the 1960s because this event is expected to be a very important chapter in the history of the British monarchy. It's expected to be the most disrupting event of the 21st century and millions of people are going to watch it. Everything down to the last minute and quarter of an inch is being planned to give Queen Elizabeth II the grandest farewell ever. This video is narrated by Clundor. Check out his channel here – https://www.youtube.com/channel/UCq0zANl2rZi7MK8UjTadw_Q —————————————————————————
[CREDITS] Visuals and Music used in this video are copyright free, CC, CC2.0 or used with permission
Select footage courtesy of Pixabay and videvo (https://www.videvo.net/)
Music – Kevin Mcleod – Impact Lento
Chris Zabriskie – Divider – Divider ———————————————————————
Follow the channel on these platforms to get updates about new uploads Twitter – https://twitter.com/sidenoteYT
Facebook – https://fb.com/sidenoteYT
Instagram – https://instagram.com/sidenoteYT Email – sidenoteYT@gmail.com Hello. I make informative videos on topics I find interesting. Subscribe to the channel if you like my videos. Thanks. ——————————————————————– More videos on this topic from other creators- What Happens When The Queen Dies | Vanity Fair – https://www.youtube.com/watch?v=v61JI6h423E
The Secret Protocol for When the Queen Dies – https://www.youtube.com/watch?v=8-u5nd2GqNE
Top 10 Things That Will Happen When Queen Elizabeth Dies – https://www.youtube.com/watch?v=YUco7bj97sE
Top 10 Things That Will Happen When Queen Elizabeth Dies – Part 2 – https://www.youtube.com/watch?v=Qckqu9q5HMw It's been 66 years since the death of a monarch in Britain and accession of a new one. King George VI died in 1952 making Queen Elizabeth II the new Queen and she has been holding the throne since then.
The Royal Palace has been preparing for queen's demise since the 1960s, under the codename of "Operation London Bridge", and there have been meetings several times a year behind closed doors to refine the details.
The particulars of this grandest plan had remained a closely kept secret until Sam Knight, a journalist for The Guardian newspaper, interviewed dozens of people involved, with a promise of confidentiality. The Guardian newspaper, interviewed dozens of people involved, with a promise of confidentiality.
Everything down to the last minute is carefully planned to give Queen Elizabeth a farewell of the kind the world has never seen, and most probably will never see again. In finals hours, the queen will be with her family and a team of doctors led by the queen's senior doctor, Professor Huw Thomas. He'll constantly monitor her health and also consider what information should be made public. People will be notified about queen's health at a regular interval until the last bulletin which may read something like this – "The Queen's life is moving peacefully towards its close" as it happened in case of George V. George V's doctor At BBC, a cold-war era alarm system called RATS, short for "radio alert transmission system", will be activated. Reporters and anchors have been rehearsing the death of the Queen for over 30 years, substituting the name “Mrs. Robinson”. For many years, they have performed mock storylines about the Queen Mother choking on a fishbone.
These rehearsals will immediately be put into action. There is a network of blue lights, called "obit lights", installed at Britain's commercial radio stations. They are supposed to light up in event of a National catastrophe and are tested once a week. When the news of Queen's demise breaks, these lights will start flashing to alert the DJs to switch to the news in a few minutes and to play inoffensive music in the meantime.
This will be the beginning of 10 days of sorrow and spectacle, which are officially numbered as D-Day, D+1, D+2…and so on till D+9.
On D+1, the day after the Queen's demise, the flags will go back up, and at 11 am, Charles will be proclaimed king at the Entrée room of St James's Palace.
This will be the time for Charles to go out and meet his people. A four-nation tour by the new king will immediately kick-off. 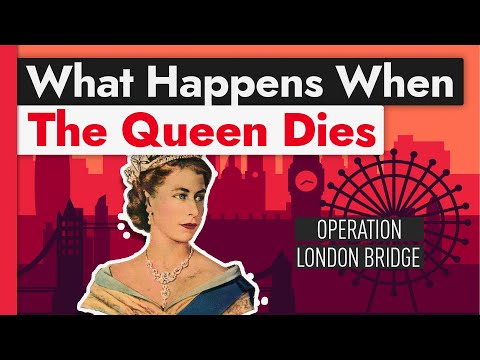