Model Mushk Kaleem admits to being afraid of gaining weight
Why is the F-35 so Expensive?
🇵🇰 Pakistan: Can Imran Khan hold on?
Dozens of European countries report record COVID-19 rates
🇺🇸 US 2020: What does the world make of it all? | The Stream

Subscribe to our channel! rupt.ly/subscribe Mandatory credit: Residual Mechanism for Criminal Tribunals (IRMCT) The appeal hearing for former Bosnian Serb military chief General Ratko Mladic began at the International Residual Mechanism for Criminal Tribunals (MICT) courtroom, in The Hague on Tuesday. Due to the coronavirus outbreak, glass panels could be seen separating the attendees, including Mladic. Court officials could also be seen wearing masks. On November 22, 2017, the International Criminal Tribunal for the former Yugoslavia (ICTY) sentenced Mladic to life imprisonment after finding him guilty of genocide and crimes against humanity for his role in the war in Bosnia and Herzegovina. The 78-year-old, who was found guilty in 10 out of 11 counts, faces spending the rest of his life in prison should his appeal fail. Video ID: 20200825-030 Video on Demand: https://ruptly.tv/videos/20200825-030 Contact: cd@ruptly.tv Twitter: http://twitter.com/Ruptly Facebook: http://www.facebook.com/Ruptly 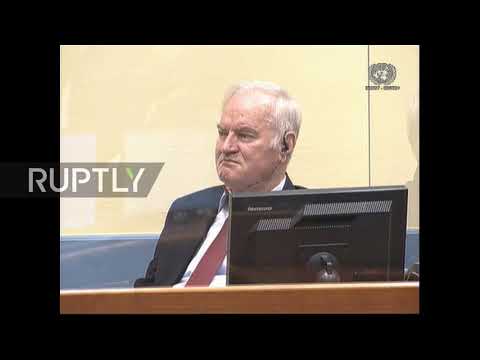