Subscribe to our channel! rupt.ly/subscribe Juventus manager Andrea Pirlo held his first press conference as the team's head coach, in Turin on Tuesday, touching upon a variety of topics, from his rapid promotion to the first squad, to questions of […]

Subscribe to our channel! rupt.ly/subscribe Juventus manager Andrea Pirlo held his first press conference as the team's head coach, in Turin on Tuesday, touching upon a variety of topics, from his rapid promotion to the first squad, to questions of key players such as Cristiano Ronaldo, Paulo Dybala, and Gonzalo Higuain. Pirlo, who was briefly at the helm of the club's Under-23 squad, was promoted into the first team manager without having a single day of experience at the head of a major squad. "I didn't even have the time to think about my passage from the Under-23 [squad] to the first team, because it all happened very quickly. When they asked me whether I'm confident I can be the manager of the first squad, I immediately threw myself into it," he said. Pirlo revealed that he spoke to star players Cristiano Ronaldo and Paulo Dybala, and cemented their importance to his project. He also dismissed transfer rumours regarding Dybala, accusing journalists of creating the rumour mill "every now and then." Pirlo announced that striker Gonzalo Higuain would be leaving the squad after several years, and thanked him for his contribution. In addition, he also announced the arrival of assistant manager Igor Tudor, who would "keep an eye on" the defensive department. In closing, Pirlo said the he wants to bring "a bit of enthusiasm" to the team, which he considers was lacking in the past few months. "I want purposeful football, as you said it, to dominate the play. Like I told the players yesterday, 'I want two things: one, we need to always have the ball; second, we need to try and win it back as soon as we lose it.' These two things were first things that I told them regarding tactics. These are the things I believe in. I think they are the most important things to instil in their minds," said Pirlo. Video ID: 20200825-053 Video on Demand: https://ruptly.tv/videos/20200825-053 Contact: cd@ruptly.tv Twitter: http://twitter.com/Ruptly Facebook: http://www.facebook.com/Ruptly 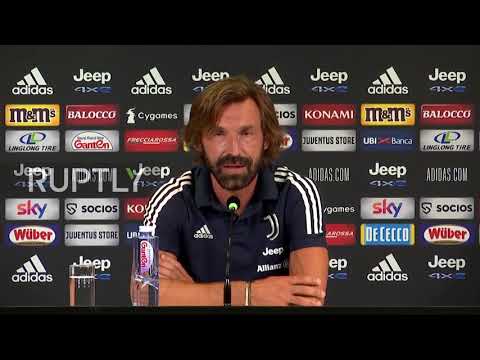