EMBATTLED Boris Johnson said a "circuit breaker" lockdown would be a "disaster" as he again slapped down Labour's demands for a UK-wide shutdown in a fiery PMQs. The PM lashed out at Sir Keir Starmer for seeing the pandemic as […]

EMBATTLED Boris Johnson said a "circuit breaker" lockdown would be a "disaster" as he again slapped down Labour's demands for a UK-wide shutdown in a fiery PMQs. The PM lashed out at Sir Keir Starmer for seeing the pandemic as a "good crisis to exploit" as he rejected his calls for a "circuit breaker" shutdown. It comes after a stormy morning at Westminster with Tory 'hawks' lashing out at the idea of a national lockdown as a "business breaker." Mr Johnson stormed this lunch time that he would not U-turn on his regional approach which will keep kids in school and keep businesses going. He said: "(The three tiered local lockdowns) would deliver the reduction in the R, locally, regionally, to avert what none of us want to see. "And that is the disaster of a national lockdown. We don't want to go there, we want a regional approach. He should cooperate with it." (Sir Keir) wants to close pubs he wants to close bars he wants to close businesses in areas where the incidence is low. "Let's try to avoid the misery of another national lockdown in which he would want to impose as I say in a headlong way. "Let's work together to keep kids in school, who he will now yank out school in a peremptory way, keep our economy going, keep jobs and livelihoods supported in this country." In a intense exchange, Sir Keir accused the PM of being an "opportunist all his life". He lashed out at the PM, saying: "This is difficult for him to understand. But having read and considered the Sage advice I have genuinely concluded that a circuit breaker is in the national interest." Read more
Boris Johnson says ‘circuit breaker’ lockdown would be a DISASTER in fiery PMQs clash with Sir Keir Starmer
https://www.thesun.co.uk/news/12927011/tory-hawks-blast-national-circuit-break-sage-labour/ From Brexit breaking news to HD movie trailers, The Sun newspaper brings you the latest news videos and explainers from the UK and around the world. Become a Sun Subscriber and hit the bell to be the first to know Read The Sun: http://www.thesun.co.uk Like The Sun on Facebook: https://www.facebook.com/thesun/ Follow The Sun on Twitter: https://twitter.com/TheSun Subscribe to The Sun on Snapchat: https://www.snapchat.com/discover/The_Sun/1633225139 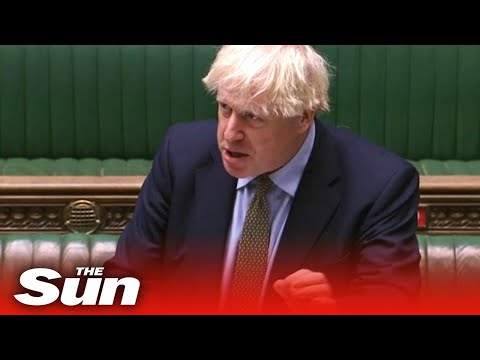