Camouflage Passports have a unique purpose and they have been successful in fulfilling it. People carry these in order to fake their nationality in emergency situations. These passports are made in the name of countries that no longer exist or […]

Camouflage Passports have a unique purpose and they have been successful in fulfilling it. People carry these in order to fake their nationality in emergency situations. These passports are made in the name of countries that no longer exist or in the name of parts of countries that don't hold the rights to issue a passport. This video is narrated by John Swan. Check out his channel here — https://www.youtube.com/user/lapisgamingofficial/videos ———————————————————————
Follow the channel on these platforms to get updates about new uploads Twitter – https://twitter.com/sidenoteYT
Instagram – https://instagram.com/sidenoteYT
Email – sidenoteYT@gmail.com ————————————————————————— Visuals and Music used in this video are copyright free, CC, CC2.0 or used with permission
Select footage courtesy of Pixabay and videvo (https://www.videvo.net/) ————————————————————————-
Hello. I make short-doc/informative videos on the most interesting, weirdest and unusual stories of the world. Subscribe to watch more. ——————————————————————– In order to get a passport, you need to belong to a country – which may seem like a pretty normal thing but not everyone in this world enjoys this privilege. Around 12 million people in the world are "stateless" which means they don't belong to any country. They can't cross international borders to travel to a country unless they obtain Refugee travel documents. Furthermore, just because you hold a passport issued by a country doesn't automatically make you a citizen of that nation. Latvia issues non-citizen passports to individuals who are not citizens of Latvia but their families have resided in the area since the Soviet era. People born in outlying possession of United States – American Samoa and Swains Island – are united states national and not united states citizens. They carry US passports but are not allowed to vote in federal or any state elections. Common people in North Korea aren't allowed to have passports even though they are the citizen of the nation. Among all rules and anomalies of the colorful world of passports, there are more than 200 government bodies from 195 recognized sovereign countries in this world that can issue passports of different kinds to their people. Apart from that, the European Union has got a list of 180 passports that are fictional, mostly intended for fun and don't carry any value. This includes "Passport for Alaska" to "Passport for Texas" to "World Passport" for everyone. On the same list, there's a section for "Camouflage passport", and this is probably the strangest of all. Unlike others, this passport isn't intended for fun and is designed to fool the holder into believing that the passport is, in fact, a real one. It looks pretty normals from inside and outside, follows all basic guidelines but there is a basic flaw – the country it says it's issued from doesn't exist.
So, clearly this passport can't be used to cross borders but still, hundreds of people around the world carry such passports with them while traveling overseas. The purpose is to hide the real nationality of the traveler and provide false identification to be used in extreme emergency situations where revealing the real passport and hence nationality could be imprudent, dangerous or bring unwelcome attention Today, camouflage passports are mainly sold online in name of more than two dozen little-known countries that no longer exist or have changed their name. Mostly, these are former colonies that changed their name on independence like, or use the names of places or political subdivisions that exist within a real country but have never issued or cannot issue passports. The motive is to sound familiar but not too familiar in deceiving a customs, immigration or police officer into believing that a bearer is a person from a small, unimportant, and far away country that is not an enemy, or, in a terrorist situation, that the bearer is not a potentially high-value hostage. In simple words – a not very interesting man from a not very interesting country. 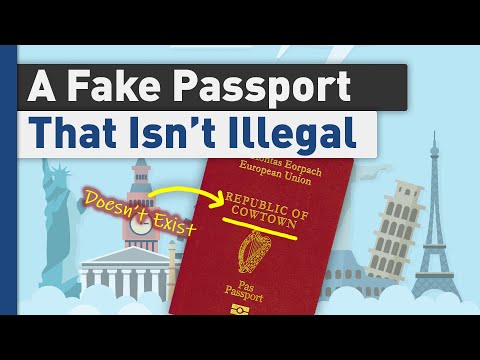