A few months ago, the Repeller team started putting together a series of stories about motherhood and parenting during the pandemic. The first piece featured Abbi, who detailed her experience of being pregnant for the first time during strict social […] 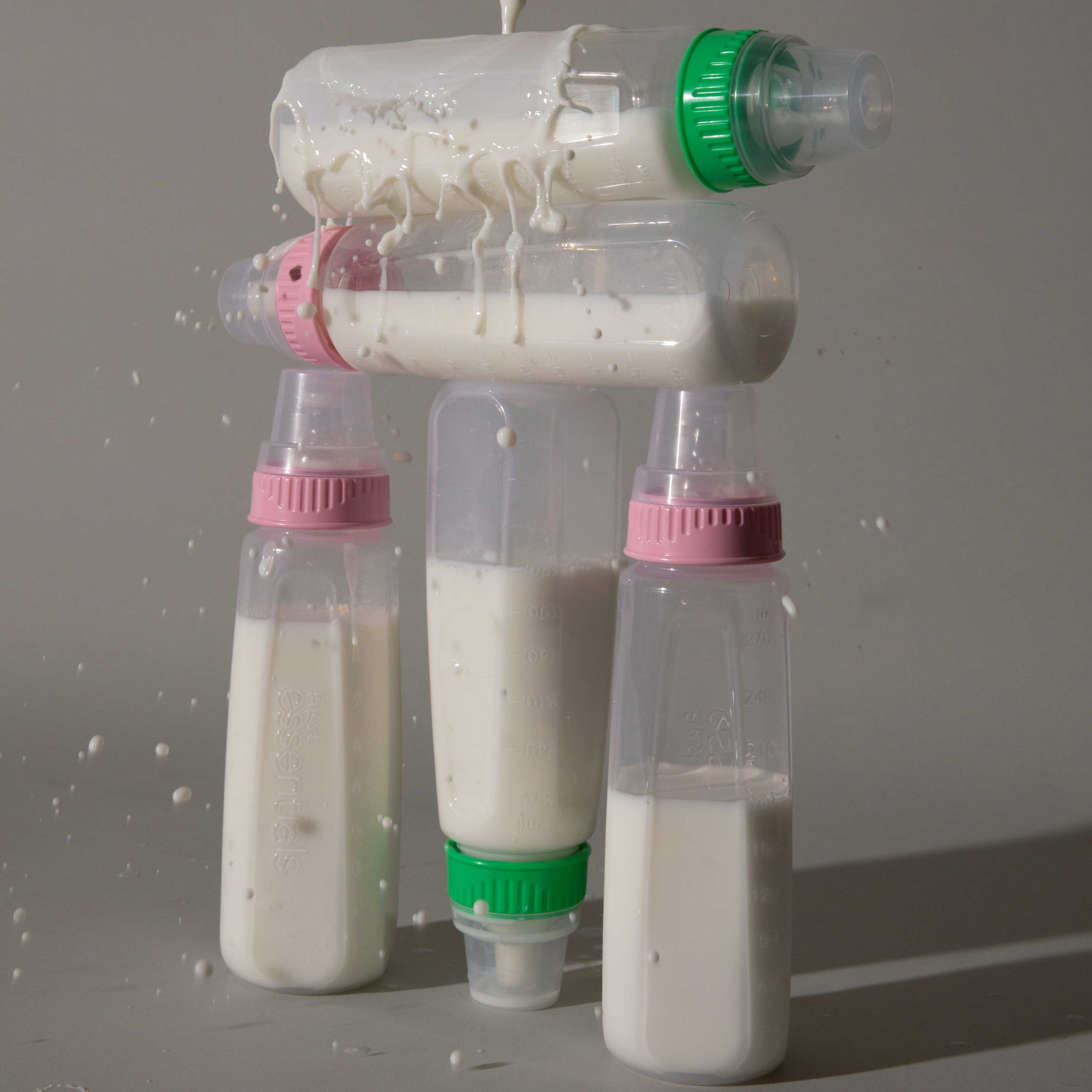 A few months ago, the Repeller team started putting together a series of stories about motherhood and parenting during the pandemic. The first piece featured Abbi, who detailed her experience of being pregnant for the first time during strict social distancing regulations in Los Angeles. Today’s story is shared by Katy, who has been undergoing IVF in order to conceive a child with her wife—a complicated process made even more harrowing by COVID-19 related business closures.

In 2019, when I was 35, I had a weird, super-late period. I happened to be going to see my OB that month and said, “Is this something I should be concerned about? My wife and I want to have kids but we’re probably still a year or two away from that.” She said, “You shouldn’t be worried about one weird period, but if you’re one or two years away from starting a family, I would recommend you just start the process and educate yourself and make an appointment with a reproductive endocrinologist.” So, last May, we did that.

So we basically started trying to get pregnant shortly after that. We found an egg donor online and started trying to do an IUI [Intrauterine Insemination]. Every month I would do blood work to determine whether I could even try that month based on my egg level. So, we tried three times and did not get pregnant three times. Then we had more months when we weren’t able to try at all.

I learned so much about my period while going through fertility. I literally realized at age 36 that my body’s been doing this for 28 years and I had no idea what the hell was going on. I didn’t understand the intricacies of which hormone your body produces during the first half of your period and which hormone your body produces in the second half, in order to thicken the lining to prepare for a baby to implant itself in your uterus. I just had no idea what any of this was doing.

There are gross things I’ve learned now that I’m supposed to be aware of when I ovulate. They recommend paying attention to your discharge during the second half of your period. There’s this woman who recommends putting your fingers in it so you’re familiar with the texture, and as the texture changes, you’ll know when you’re closer to ovulation. It’s the craziest stuff that I’ve learned about myself during all this. I think nobody knows anything about how their own fertility and reproduction works until there’s a problem.

Anyway, my hormone levels were too near to menopause that month and my doctor at the time would say, “I don’t recommend that you spend the money to try with your hormone levels looking the way they do.” Then we started with a new doctor right before COVID. She agrees with the diagnosis that I’m starting menopause very soon and she feels like I don’t have many months left. But she wants to continue on and keep trying a couple more times. We’ve basically said we want to try one more time. It fits how much sperm we have left from our sperm donor. But we wouldn’t try this May because the clinic was closed.

Then, on top of that, just coincidentally, super-fun, on my period that month, I started getting hot flashes. So I was having hot flashes, I don’t know, throughout the day and night, probably 25 to 30 times. It felt like this constant reminder that my window was closing rapidly and all I could do was sit in my apartment and think about it. There was just nothing I could do.

Hot flashes come along with some of those fertility drugs but this is definitely the first time I’ve had hot flashes without the assisted drugs. The first few times I didn’t even notice it and then by the end of the day I realized, “Okay, this is not like ‘Oh, I was walking around and I got hot.’ This is a hot flash and this is continuing to happen, it’s not a one-off and I’m not taking any drugs. This is just my body doing this.”

My hot flashes start from my back. So, all of a sudden it’s just, like, heat radiating off of my back all the way up my neck, under-boob sweat. I mean, it’s awful. The only good thing is that quarantine is a good time to have them because I can take my shirt off in the middle of a conference call and no one will know.

But, another thing that’s frustrating is that I follow all of these people—I don’t know what to even call them, people in the infertility world, women who are experiencing this—and I listen to a couple podcasts about it. Everyone was saying, “You know what, while we’re all taking time off of our fertility rounds, we’re home, maybe we’ll just get pregnant.” It was all of these heterosexual couples talking about how that’s an opportunity. And I was just sitting there with my wife going, “There’s no sperm in this apartment.”

Basically every time you start your period, you start the opportunity for a new cycle. So I called my clinic when my period started at the beginning of May and they said, “We aren’t able to open for that service.” They basically only opened for one very specific type of surgery or procedure, which is frozen embryo transfer. Not coincidentally, it’s the most expensive one that you can do. They weren’t open for the one that I need, which is the least invasive, least expensive. But they did say to check back in two weeks. So, I was ovulating that week in May, but there was nothing we could do because we didn’t go and get my baseline blood work done on the first week of my period.

I’m married and my wife has been incredible through all of this. She’s never had the desire to carry a child, so there are some aspects of this she can’t totally empathize with, but she’s been incredibly sympathetic. After I knew I wouldn’t get able to get an appointment, I’d been doing really well and feeling positive, like, “You know what? This is meant to work out the way it’s supposed to work out.” I’ve been on these crazy fertility diets and I’ve been completely restricted. I haven’t had caffeine or alcohol for, like, six months. In some ways it was a relief to be able to say during quarantine, “You know what? I’m going to have a glass of wine tonight and it’s fine.”

I thought, I’ve got at least two weeks where I can work out the way I want to work out. Eat whatever I want to eat. I can drink. I can stop eating so much goddamn kale every day. Kale is supposed to make you fertile. I think I drank an entire bottle of wine by myself. And I had a coffee on Saturday morning for breakfast. It was amazing. I’ve definitely had wine since then, but very healthy moderate amounts, not super-fun amounts of wine.

It was nice to have that stress removed. But Mother’s Day triggered me and everything felt impossible again. My wife had this moment where she looked at me and said, “I feel like you’re manic right now.” I’d said, “Hey, maybe [our guy friends] will be open to donating sperm. They can just come drop some off at our front door!” That’s so counter to the plan we’d created for ourselves. Going with a known donor was something we talked about in the beginning of our process, but for a lot of reasons we chose not to do that.

At that point, she felt this level of stress about it that I couldn’t understand. We talked about it and decided it was a little quick. We’d need to give our best friends some time to digest the information. It’s absolutely something we’d consider. The reality is that it would be so much cheaper for us to go that route.

READ MORE:  TikTok Is Obsessed With These $53 Gap Jeans

I’m a birth mom. When I was 18, I got pregnant and I had a baby and placed him for adoption. We’ve spent $12,000 so far, which in the scope of IVF and infertility is really low, but given what we initially thought—that we’d just have to try this one or two times and we’d be pregnant and it would be done—we thought we were going to spend $5,000. The idea of not having to spend tens of thousands more is really attractive, especially right now. My wife is a photographer and she has no income right now, so we’re living off of my income. We’re super grateful that I have a job. But the idea of spending tens of thousands of dollars for more of this doesn’t feel safe right now.

Ever since then, I’ve been so excited to get pregnant and carry my own child when I was going to keep this child, and it was meant for me. The only year Mother’s Day was ever hard was the very first year after my birth-son was born. Since then, I’ve thought of Mother’s Day as a weekend to reflect on how incredible this boy is and to reflect on this incredible life he has that I’m tangentially part of and was completely unable to give him when I was 18 years old.

This is the first year where [not being a mother again] felt like it was absolutely not my choice and I may never have this opportunity. It was a really awful weekend. I just cried all day. I mean, like, crazy amounts of crying. We live right next door to a flower shop. I was doing a workout in my apartment on Saturday afternoon and watching people in line to buy Mother’s Day flowers, just in tears.

Trying to get pregnant through IVF is a huge rollercoaster. You go through all of this hope and excitement and you’re working toward something and you think it’s going to work. Then you find out that it didn’t work and it’s an incredible low and sadness. But then, literally two weeks later, you’re back on the hope part again. I would say there haven’t been very many lows other than the times when we’ve tried and it didn’t work.

Now, clinics have reopened, and we’ve been able to try again, but we had a chemical pregnancy, meaning I got a positive pregnancy test and then started my period about four days later. We’re now taking a month off and hoping to try again in November. During the initial quarantine lockdown, we had no idea when the clinics would reopen, and now having the option to try again in the future makes me feel much less trapped and hopeless.