Donald Trump and Vladimir Putin are two men with the same mission: They say they want to make their countries "great again.” Trump was Moscow’s preferred candidate in the 2016 US election. But now, the Kremlin may be having second […]

Donald Trump and Vladimir Putin are two men with the same mission: They say they want to make their countries "great again.” Trump was Moscow’s preferred candidate in the 2016 US election. But now, the Kremlin may be having second thoughts. Donald Trump was elected to the US presidency on 9 November 2016, defeating Hillary Clinton, who was anything but popular with the Russian government. Yet a short time later, after relations between the two countries had become as bad as they’d been since the Cold War, Moscow may have been changing its mind. The relationship has been dogged by scrutiny in the US, in particular the Mueller investigation into Russian meddling in the presidential poll. How will Russian-US relations develop now? What deals can Moscow offer to Trump, who thrives on bluster, bluff and berating opponents? And how does that square with Putin’s ambitions to make Russia a global superpower again? This documentary examines the ebb and flow of Russian-US relations and the personal ties between the two presidents. Politicians, insiders and experts discuss what the two men have in common and the limits of cooperation between them. The filmmakers also talk to people such as the Deputy Chairman of the Russian Duma, Piotr Tolstoi. Journalists Evgeniya Albaz and Mikhail Sygar and Kremlin mastermind Sergei Karaganov round out the Russian perspective on the relationship between the two men and their countries. ——————————————————————- DW Documentary gives you knowledge beyond the headlines. Watch high-class documentaries from German broadcasters and international production companies. Meet intriguing people, travel to distant lands, get a look behind the complexities of daily life and build a deeper understanding of current affairs and global events. Subscribe and explore the world around you with DW Documentary. Subscribe to: DW Documentary: https://www.youtube.com/channel/UCW39zufHfsuGgpLviKh297Q?sub_confirmation=1#
DW Documental (Spanish): https://www.youtube.com/dwdocumental
DW Documentary وثائقية دي دبليو: (Arabic): https://www.youtube.com/dwdocarabia For more visit:
http://www.dw.com/en/tv/docfilm/s-3610
Instagram:
https://www.instagram.com/dwdocumentary/
Facebook:
https://www.facebook.com/dw.stories DW netiquette policy: https://p.dw.com/p/MF1G 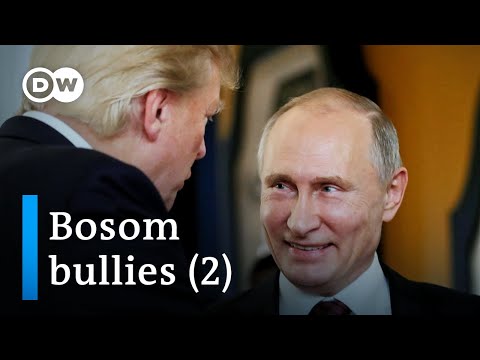 Read also:  Billie Eilish Almost POOPED When THIS Celebrity Danced To Her Music